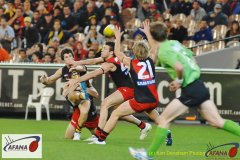 Deledio was interviewed on SEN Radio and said he knew early in the year that 2019 would be his last, saying he knew he would have to play almost every game to be offered a new contract, but knew that would not happen, “It was over Christmas ... when I was spending so much time with my family and dealing with another nick in my calf, that I really started to realize that it was probably going to be my last year." He also said he "began to feel his age" when he joined GWS and joked, “I always hated being called old because I still felt so young and fresh ... I said to the boys: ‘I’ve been here for three years and I have not sung along or known one song you’ve played pregame, in the gym’ I try and play my stuff and they just think I’m prehistoric.”

Giants' GM of Football, Wayne Campbell, was full of praise for Deledio, " ... what he’s achieved in the game is a credit to not only his natural ability but his want to compete and continually improve himself ... he’s provided so much to our football club in three short years".

Campbell remarked on the way Deledio has carried himself with all the injury setbacks, saying Deledio was "all class' and that when he did get out on the field, it reminded everyone of just good a player he was. He was again sidelined during the Round 21 game with a calf injury but is hoping to make it back for the finals.

Dawson Simpson, 30, was originally drafted by the Geelong in 2007 and played 28 games for the Cats over eight seasons. He was a member of Geelong's 2012 VFL premiership side. He joined GWS at the end of 2015 as an unrestricted free agent and impressed in his first game with the Giants with 44 hitouts. Through Round 21, he has played 19 games with GWS and was a member of the NEAFL 2016 premiership team.

His influence off the field has been just as important, being a qualified personal trainer. During his time with GWS, he has run weekly fitness classes for the staff while his wife Allira works in the club’s community department.

Football Manager Wayne Campbell said of Simpson, “The Giants and Geelong ... are better places for having Dawson ... Daws is one of those people who becomes the heart and soul of a football club and the impact he and his family have had ... is immense. He will be sorely missed due to his character, work ethic and resilience. He will leave a hole on-field, off-field and in the gym where he has kept our staff in shape over the past few years."

Simpson said he is content with his career, “I probably haven’t achieved what I wanted to when it comes to games played, but I think the resilience I’ve been taught has created a man that can make a difference outside of football ... I think that had I had an armchair ride ...  career, I wouldn’t be the same person today. I wouldn't have the same depth and resilience in my character if I didn't have the setbacks I had and the injuries I've had. I look back ... happy with what I’ve been able to achieve ... The friendships I’ve made at both the Cats and the Giants will last for a lifetime and that’s one of things I look back on with the greatest fondness.”