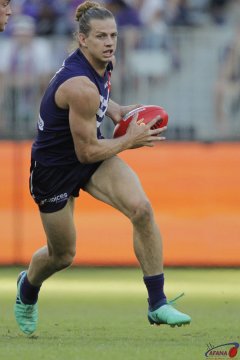 The Dockers started the second quarter with a focus on winning contested possessions and shutting down the St Kilda run. They were buoyed early by a bad miss on goal by St Kilda's Jade Gresham, which would have put the game beyond any early doubt. Rory Lobb responded at the other end by marking a Sean Darcy kick and booting the Dockers' second goal. The Dockers slowed the game to their terms by playing "possession football" using short kicks to deny the opposition a chance to win turnovers and run free. Possession football leeches the energy from high octane teams like St Kilda. The Saints became frustrated. The frustration found its manifestation in a high hit by Ben Long on Sean Darcy, who at the time was the Dockers' best player on the ground. The hit was perhaps intended to invoke a reaction from the Dockers and fire up the Saints. The Dockers maintained their cool. Their focus was their game strategy. Darcy was concussed and took no further part in proceedings, but it didn't matter. Lachie Schulz nipped behind the pack for a soccered ball and goal, to give the Dockers their third. The Saints steadied briefly. They won a free kick at the next center bounce and booted long to Max King, who kicked truly to shore up the team's lead. The Dockers were unfazed and slipped back into their game plan. With two injured players on the bench, they held onto the ball and conserved energy by kicking short to retain possession. The Saints couldn't get their hands on the ball and the Dockers inched forward with goals to Taberner, Matt Bewley, and an increasingly dominant Nat Fyfe.

The third quarter was more of the same. The pace and energy of St Kilda was defused by the Dockers controlling the ball and also the tempo of the game. Nat Fyfe appeared injured and unable to run. He was stationed at full forward. The Dockers had just nineteen fit men, but importantly (leaving only one on the bench at any time), still controlled the pace of the game. Docker goals to Matt Taberner (from the boundary) and Darcy Tucker (in traffic) leveled the game at the seven-minute mark. The Saints dug in with Marshall winning late ruck taps and Jack Steele working hard, but the Dockers set up smarter at the stoppages. Their wingmen remained disciplined and refused to be drawn into the contest. They waited for the ball to be knocked from the packs. St Kilda's frustration erupted again when Rowan Marshall struck Docker defender Nathan Wilson and gave away a free kick which was relayed forward. A high mark by diminutive draftee Caleb Serong, earned him his first career goal and the Dockers had a one goal lead. There was no running from all over the field to congratulate him. The team structure was more important than individual achievement.

Two early goals in the final quarter to Bailey Banfield and Fyfe pushed the Dockers to an unlikely margin of 20 points. At the 14-minute mark, it seemed the wounded Dockers would hold on for a shock win. But the Saints reignited their thrusters and willed themselves back into the game, with goals to Tim Membey and Jade Gresham. With little more than two minutes left the drama ratcheted up yet another notch. Docker veteran David Mundy was tackled high and penalized for holding the ball. Michael Walters stood on the mark where the tackle began, rather than where the free kick was paid and gave away a fifty-meter penalty which resulted in a Saints goal to Zak Jones and a tied score. The Dockers responded by working the ball forward again. They lowered their eyes in attack with two short chip-kicks, which finished with a mark to Schultz. The firebrand coolly slotted the match-winner with just a minute left on the clock. The Saints fought on but couldn't break clear of the tenacious tackling of Fremantle, who won a game that will be remembered as the season's most dramatic comeback. Indeed, it was the largest comeback after a first quarter deficit in club history.

The Dockers have returned home after more than a month in the Queensland hub, and next week play at Optus stadium a true home game against the Eagles (who share the ground) in front of 30,000 fans. The Saints fly to Adelaide Oval to play the struggling Crows.