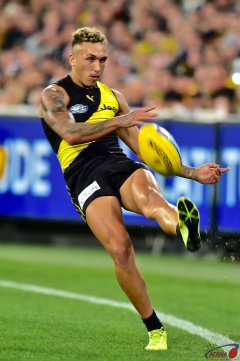 The West Coast Eagles were eaten alive by a hungry Richmond Tiger outfit that is determined to regain lost prestige. The proud Tigers finished twelfth in 2021 and were determined to show the football world that they still had what it takes to rip a team apart on a Friday night stage. Their first goal came after Eagles’ captain Luke Shuey dropped a mark (catch) and Kane Lambert launched an attack, where Jayden Short kicked to Jason Castagna who marked and kicked truly. The Eagles responded three minutes later with ruckman Luke Strnadica gathering a ground ball from a marking contest to boot a goal in his first game. After that, there was little joy for West Coast supporters until the 22-minute of the final quarter, when veteran forward Josh Kennedy booted his fourth goal for the game and the 700th of his career.

The flogging from Richmond sent West Coast to the bottom of the premiership table with little hope of a resurgence in the next few weeks. The Tigers used the game to tune up their skills and launch for a spot in the top eight with the imminent return of their best player, Dustin Martin. The Tigers’ game plan was simple. Pressure the struggling Eagles until they turned over the ball and then make them pay. The plan worked perfectly as the Eagles fumbled and dropped the ball under mid-field pressure. Richmond kicked twenty-one goals eight behinds (worth a point each) directly from turnovers. When the Eagles lost control of the ball, they had no defensive back-up plan and the Tigers whipped the ball back into attack.

Tom Lynch had a day out for Richmond in the forward line, as he took fourteen marks and won thirteen contested possessions to boot seven goals and five behinds. West Coast were lucky that so many of Lynch’s shots were offline. Jack Reiwoldt worked well alongside Lynch to also help himself to four goals. Toby Nankervis and Ivan Soldo dominated in the ruck winning the hitouts forty-five to fifteen. To the Eagles’ credit they almost equaled Richmond in clearances, but it was what they did with the ball once it had cleared the ruck contests that brought them undone. Luke Shuey won six clearances, while first-gamer Greg Clark and Tim Kelly won four each. However, it was Richmond’s Shai Bolton who won the most clearances (seven) and created devastation with the ball when he drove it forward.

Richmond’s Jayden Short made the most of his move to the center of the ground to win thirty-one possessions and also set up numerous attacks. Liam Duggan, Luke Shuey, Greg Clark and Jack Redden struggled hard for the Eagles but they were simply overwhelmed by the pace and quick ball movement of Richmond. Daniel Rioli was his usual creative self but the spotlight fell on his cousin, Maurice Rioli Junior, who booted two goals in two minutes and then finished the game with three goals.

It is difficult to gauge how well Richmond are playing as the performance by West Coast was insipid and had all the hallmarks of a team struggling with confidence and suffering injuries to key players. Richmond have games against Collingwood, Hawthorn, Essendon and Sydney. Results from those games will give a more accurate fix on whether Richmond will make the finals this year. The immediate future looks bleak for the Eagles and it will be a season to forget for their supporters. In coming weeks the Eagles meet Brisbane, Melbourne, the GWS Giants and the Western Bulldogs and appear to have little chance of winning those games.