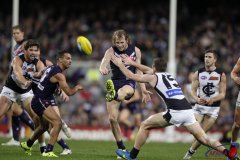 Fremantle was on the scoreboard early with goals to David Mundy and Michael Walters who were both in scintillating form. It was a good start with the Freo “blast” opening attack. Stephen Coniglio got the first goals for the Giants and inspired them. The Giants brought good heat to their tackles causing the Dockers to panic when they had the ball and make hasty decisions. Although Fremantle players were able to get the ball out of the back line they were consistently turning it over at half forward, then trying to sprint back to cover the rebound attack. The Giants were pinpointing kicks and making the Dockers chase their opponents. Zac Dawson was playing his first game in months but landed himself in hot water with an elbow to the face of Jeremy Cameron, causing the young Giants' forward to go off the field with blood streaming from his mouth and nose. (Editor's note: Dawson has been suspended for two matches by the Match Review Panel as a result of the incident.)

Another concussion injury to Matt Buntine, his second in as many weeks, had GWS going with their substitute Jack Steele early. Over two thirds of the game was played in the Dockers’ forward half but they could not get the big scores on the board to put pressure on the Giants who were having success with a fast break style through the middle of the ground. Fremantle had 14 shots to eight at the half time break but only led by 26 points due to some shoddy kicking on goals.

After the main break GWS knuckled down and went back to their slingshot moves through the center. The tactic proved successful and they clawed back the deficit to just 12 points with goals to Tom Scully and Jed Lamb. Fremantle players decided that enough was enough and lifted their tempo and kicking accuracy to take a commanding lead of 33 points into the final term. Matthew Pavlich led the Dockers from the front and kicked his second goal on the siren to take some momentum into the final break.

Lachie Weller made his first appearance in the AFL for the Dockers when they substituted him for Alex Pearce. He received a huge hometown cheer when he ran onto the ground and the warm welcome continued every time he took possession of the ball. The Giants may have thought the cheering was for them as they continued with their attack on Fremantle, lifting their own intensity and storming back into the match. They kicked four goals to two in the fourth quarter but it wasn’t enough to overcome the Dockers. The deficit might have been different if not for a howler of an error by the boundary umpire who called a free kick for out of bounds on the full to Fremantle when it had should have gone to the Giants. This upset the GWS momentum and a goal resulted for Fremantle. Had it gone the other way the end result might have been different.

GWS was certainly not disgraced and can take heart with the way they played against the top team in the competition. If the Giants can build on their efforts in the coming weeks, there is the potential of playing in their first Finals' campaign since coming into the League four years ago. Fremantle looks likely to retain the top spot on the Ladder and host at least one home Final that has the Western Australian crowd drooling with anticipation.