Suns Rise in the West

The Gold Coast Suns seared a stunning victory into the aging skin of the Fremantle Dockers and won for the first time at Domain Stadium. 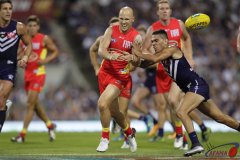 In what captain Gary Ablett described as his young team's greatest win, the Suns withstood the Dockers' early pressure to win the game with a powerful second quarter. The much anticipated battle between Ablett and reigning Brownlow medalist Nat Fyfe became a minor consideration. Instead a galaxy of young Suns led by Aaron Hall, Alex Sexton and Dion Prestia, pounced on Docker errors to punish repeated mis-kicks and fumbles. Fyfe had a game high 34 possessions, including 3 goals in the third quarter, but Ablett was steady around the ground, winning 23 possessions and bringing his teammates into the game.

The Dockers dominated the hit outs with Aaron Sandilands using all of 6 foot 11 inch frame to feed his followers at center breaks. The Dockers also led at the stoppages around the ground. They won the clearances 44-31 and had nine more forward entries. The difference though, was the efficiency of the disposal used by the quick-thinking and speedy Suns. Jack Martin played his 25th game for Gold Coast and showed why he has been so highly rated. He only gained 16 possessions but delivered with more than 80% accuracy and kicked four goals. His first goal was a result of a mark over the Dockers' intercept specialist, Garrick Ibbotson. No mean feat in itself.

Both teams flooded players into their respective defensive areas. It appeared that for much of the game, it was played on the Dockers' terms. This was not one of those free-flowing games of quick ball-movement from end-to-end, which have excited crowds in games on the East coast of Australia early this season. But there was a still a subtle change to the Dockers' middle structure. Their center square strategy was more open and attacking. It worked. But the subsequent deliveries didn't match the efforts to win the ball. Particularly in the second quarter, when Sexton and Hall pounced on glaring errors; and the adventurous Dockers were left exposed.

The Dockers used a more defensive center structure after halftime, but could not recover from the 5 goal deficit accumulated in the second quarter. Gold Coast full forward Tom Lynch outpointed a struggling Zac Dawson in the air and on the ground, to take seven strong marks and kick 5 goals. His performance allowed the Suns to attack with confidence that the ball would not rebound.

Michael Johnson played his first game this year for the Dockers and provided stability at half-back, which was sorely missed against the rabid Bulldogs a week earlier. His clean disposals initiated the Dockers' most effective attacks; but too often he saw his forwards miss easy shots, or fall prey to the superior polish and pace of the young suns. After half-time Stephen Hill raised his work-rate and he too launched his trademark attacks from half-back. But it was too late. Not even Fyfe's third-quarter heroics could shade the Suns. The damage had already been done.

Fremantle's Michael Walters (3 goals) Hayden Ballantyne (4 goals), were dangerous and gave Pavlich room to move. Ballantyne enacted Fremantle's new forward policy of "sacrificial running" by leading wide or long, to draw a defender from Pavlich. He only had five kicks, but played his role to perfection. The unsung heroes for the Suns were the old Sydney war horse, Nick Malceski, and second-year player Adam Saad, who were both ruthlessly effective driving the ball out of defense.

Next week Coach, Rodney Eade, takes his team home to face a rebuilding Carlton. He would be quietly content that many of his younger Suns outshone his team's established stars. His work this week will be to convince them that confidence and superior skill alone will not always deliver results. Ross Lyon has similar-but-different work to do. He won't panic. He too will be inside his players' heads. They have been burnt by the Suns. The scourge of doubt in the game plans could spread its cancer across his aging team. They play West Coast as an "away" game next Saturday in Subiaco. The Hawthorn shutdown of West Coast will give Lyon further food for thought.