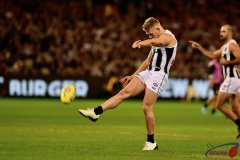 with the Swans taking a classic by 16 points despite a late surge from the upstart Giants. In other games, Melbourne finally broke its 17 game losing streak against the Kangaroos, Richmond re-established its fortress at the MCG with a win over Hawthorn and a young Western Bulldogs answered their critics with a resounding victory over a disappointing Essendon at Etihad Stadium.

Geelong mounted a stirring second half comeback to take the lead against the West Coast Eagles in the third quarter after trailing by 32 points at half time, but lost Guthrie, Cockatoo and Ablett to injuries along the way. The lack of soldiers in the last 10 minutes cost Geelong dearly as the Eagles ran over the Cats to win by 15 points. Collingwood played a small forward line to outclass a struggling Carlton, while the Fremantle Dockers won at home again against a plucky Gold Coast Suns. Finally, the Adelaide Crows continue to shine despite injuries to key midfielders, defeating a lackluster St Kilda at Etihad Stadium by 49 points.

All of the above means it’s a South Australian 1-2 on the AFANA AFL Power Poll after round three, with the Carlton Blues dropping all the way to number 18. To add some context to where clubs are at in relation to youth and experience, this week I have added the average age of each player fielded by every team, which shows just how young the Western Bulldogs crew was that rolled the Bombers on Sunday afternoon.

1.    Port Adelaide Power (Last Week - 2) Average age 25 years, 4 months
The Power did have a scare against the Lions at Adelaide Oval, but with an improving Tom Rockliff, a developing young back line and Patty Ryder still to return, the only team at 3-0 deserves top spot on the AFANA Power Poll.

2.    Adelaide Crows (3) 26 years, 2 months (Oldest team fielded in round three)
The Crows broke even in the first half before completely dominating Saint Kilda in the second half at Etihad Stadium. With both Matt and Brad Crouch missing through injury, the Crows depth continues to shine. With recruit Bryce Gibbs in scintillating form and Eddie Betts returning to his best on the weekend, the Crows have plenty to look forward to.

3.    Sydney Swans (4) 26 years exactly
The Swans showed against GWS that they should remain a formidable opponent all season due to impressive midfield depth and the continued improvement of young guns including Isaac Heeney and Oliver Florent. The loss of Sam Reid to a leg injury will mean a reliance on Lance Franklin as the lone key forward in the next 4-6 weeks – a role not unfamiliar to the great man.

4.    Greater Western Sydney Giants (1) 25 years, 1 month
At times the Giants look like the most brilliant team in the league, while at others they appear lacking in intensity around the contest. The good news for Giants fans is they have a heap of talent, and look forward to having the freakish Toby Greene back next week. Rory Lobb looked to have a significant knee injury just before half time but returned to play out the game resting forward.

5.    Melbourne Demons (7) 25 years, 2 months
Key forward Jesse Hogan played up the ground in a scintillating performance that showcased his running ability on top of his attacking skills. The change in game plan worked well for the Demons, and with Christian Petracca improving every week, there is no reason why Melbourne should not feature in finals football in 2018.

6.    West Coast Eagles (9) 25 years, 6 months
Most preseason pundits had the Eagles finishing outside the top eight, and when dual Coleman Medalist Josh Kennedy was ruled out for the first month of the season, things looked grim. Enter young stars Liam Ryan, Jake Waterman, and Willie Rioli who have injected some attacking flair in Kennedy’s absence. With ruckman Nic Naitanui looking as good as ever, the West Coast has been the early season surprise packet.

7.    Richmond Tigers (10) 25 years, 7 months
The Tigers were back to their manic forward pressure best against the Hawks on Saturday, with Jason Castagna, Dan Butler and the elite hands of Shane Edwards leading the way. Add in debutant Jack Higgins with two goals, and the Tigers may not be heading for the premiership hangover that many pundits predicted.

8.    Geelong Cats (5) 24 years, 7 months
The Cats have been forced to play a young back line in the absence of injured stars Harry Taylor and Lachie Henderson, leaving them vulnerable to their opponents attack. After going down to the Eagles in tough circumstances that included losing three players  to injury including favorite son Gary Ablett Jr, Geelong will once again have its depth tested in the coming weeks. The positives have been the form of newcomers Tim Kelly, Esava Ratugolea and Lachie Fogarty.

9.    Hawthorn Hawks (6) 26 years, 1 month
The Hawks were competitive against reigning premiers Richmond but lacked variety in attack. Continually bombing the ball in long played into the hands of the Tigers backline led by All-Australian Alex Rance. Despite smashing the Tigers in clearances all day, Hawthorn just burnt too much of the football going forward.

10.    Fremantle Dockers (12) 25 years, 1 month
There has been plenty to like about Fremantle’s performance in the last two weeks, with a solid midfield led by a rejuvenated Nathan Fyfe. Matt Taberner is providing good service up forward in tandem with Cam McCarthy, while Michael Walters move to the midfield has been a revelation. It looks like some joy for the success starved Dockers might not be too far away.

11.    Gold Coast Suns (8) 24 years, 9 months
The Suns look a much improved unit under rookie coach Stuart Dew, but couldn’t match the Dockers class away from home. Losing Pearce Hanley early in the game to yet another shoulder injury was another blow to the Suns, while gun forward Tom Lynch was well held by Alex Pearce and his fellow backs. The form of ex-Crow Jarryd Lyons has been a revelation, as has that of impressive rookie Nick Holman.

12.    Collingwood Magpies (14) 24 years, 9 months
Steele Sidebottom was magnificent as was ruckman Brodie Grundy in leading Collingwood to their first win of the season over Carlton. With the impending return of bad boy Jordan De Goey from a club suspension and fragile but brilliant Daniel Wells close to playing, the Magpies finals aspirations could gain some much needed momentum over the next month.

13.    Essendon Bombers (11) 25 years, 5 months
After promising so much in 2018 with some going as far as predicting a premiership, the Bombers have looked nothing like a formidable outfit after a strong performance in round one. After going down to Fremantle in Perth, the Bombers were dominated by the previously undefeated Western Bulldogs in a game that was closer on the scoreboard than in statistical play. Angry fans made it clear that this team needs to work a lot harder if it is to deliver on its pre-season promise.

14.    Western Bulldogs (18) 23 years, seven months (youngest team fielded in round three)
A youthful Bulldogs team, under siege from the media in recent weeks, produced a magnificent four quarter performance of manic pressure and run to totally outclass Essendon at Etihad Stadium. Luke Dalhaus, Toby Mclean and Jack Macrae were sensational for the resurgent Bulldogs who will look to carry some confidence into a tough game against the Sydney Swans next week.

15.    North Melbourne Kangaroos (13) 25 years, 4 months
The Kangaroos challenged Melbourne early, before the Demons proved just too good over a sustained four quarter effort. While Ben Brown remains an elite forward, the concern with the Kangaroos is their lack of top level talent. Cunnington, Higgins and Waite are all very good players however their age profile demands that some of Norths younger talent needs to step up of they want to seriously challenge for a top eight finish in the near future.

16.    Brisbane Lions (15) 24 years, 2 months
The Lions gave Port an almighty scare in going down by just five points against the league leaders, once again missing out on the four points but gaining plenty of respect along the way. Missing midfield workhorse Dayne Beams, the young Lions took it right up to the Power with a magnificent performance from ruckman Stefan Martin leading the way. Brisbane is yet to win a game in 2018, but that will no doubt change very soon.

17.    St Kilda Saints (16) 24 years, 6 months
If the West Coast Eagles have been the most pleasant surprise of the first few rounds, the Saints have been the biggest disappointment. After a first round win against the Lions, the Saints have been smashed by North Melbourne and Adelaide in consecutive weeks. The level of skill shown by the Saints at times has been deplorable, which is hard to believe for a side that smashed eventual premier Richmond in July last season.

18.    Carlton Blues (17) 24 years, 6 months
Another team that promised to climb the ladder in 2018, the Blues have failed to deliver so far in 2018. This is a team that boasts the most first round draft picks than any other in the AFL, yet seems to be in somewhat of a holding pattern. Admittedly they have some injuries to key players, but the fans are getting restless. An injury to in-form young gun Caleb Marchbank will not help the Blues cause.