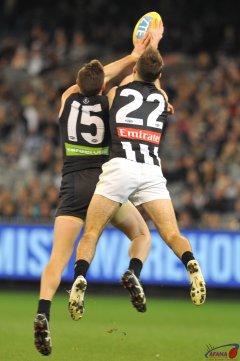 Midfielder Gibbons, 23, has been a standout in the VFL level for several seasons, winning two JJ Liston Medals (VFL equivalent of the Brownlow) in three years, and winning the Norm Goss Medal as best afield in VFL team Williamstown's 2015 Grand Final triumph.

Veteran sports announcer Sandy Roberts has announced his retirement from television after 46 years. He said he would continue on radio. Over those 40-plus years, working for the Seven Network and Fox Footy, he called over 1100 VFL/AFL games. He was also involved in eight Summer Olympics and three Winter Olympics broadcasts as well as golf, racing and tennis.

In making the announcement, he said, “I want to thank all the viewers for welcoming me in to their lounge rooms for almost five decades. It’s an absolute honor to call live sport on TV for a living and to share that excitement with fans. It’s now time to hand over the commentary ... to young guns.”

Ed note: In 1996, Sandy hosted the televised All-Australian/Team of the Century Gala. Among those named to the 20th Century team was the reclusive and reticent Blues star Bruce Doull. All those named (the ones still alive that is) were brought up on stage and Sandy spoke to a few of them before approaching Bruce for a comment, joking to Doull, "C'mon mate, this could ruin me." Doull obliged with a few brief words. It was also Sandy who dubbed Cats' star Billy Brownless as the "king of Geelong" after Brownless kicked a match winning goal in crucial game.

Just want to give a huge thank you and congratulations to Sandy Roberts on his retirement. When I first started to watch the footy, VFL back then, in the mid 80's it was Sandy who hosted the one hour highlites show on ESPN. I had no idea what was going on in the game but loved the agility and relentlessness of the players on the field. But Sandy would take time to explain some of the rules of the game and I became really hooked!!! Just wished I would have met him during my visits to Melbourne back in 1996, 1997 and 1998.