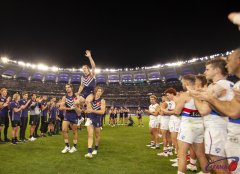 The Dockers kicked the first goal after three minutes when Michael Walters was tackled but did not have the ball and he converted the resultant free kick. The Dogs then dug in and play transitioned from end to end as defenses stood firm. Lachie Hunter, Jack Macrae and Jason Johanissen were busy in the middle for the Dogs and Nat Fyfe and Michael Walters were influential early for the Dockers. Fyfe broke the deadlock at the 18-minute mark with a silky gather of the ball and pin point kick to Andrew Brayshaw who converted. The Dogs replied three minutes later by working the ball out of defense to Billy Gowers, who hand passed to Bailey Smith who slotted a major from 40 meters. The teams then traded goals with Jesse Hogan soccering one from the goal square for the Dockers and Lachie Hunter converting from a free kick when he was infringed by Bradley Hill.

A bump on Fremantle live wire Michael Walters by Tom Liberatore after Hunter’s goal, sparked an angry reaction from Brad Hill. Players ran from all parts of the ground to become involved in a push and shove. The umpires then awarded a free kick to the Dockers, from the center circle, which Fyfe marked and converted with a booming 50 meter shot.

The Bulldog’s young ruckman Tim English played well against the Docker’s Ruckman Rory Lobb even though Lobb had the edge in winning hit-outs. However, the Dogs were stronger at clearing the ball from stoppages, with Marcus Bontempelli and Liberatore combining well. The Docker defenders Joel Hamling and Alex Pearce worked overtime to fight off Bulldog attacks. With the Dockers ruling the air in defense the Dogs worked at running the ball into attack and keeping it low. A chain of hand passes involving Ed Richards, Aaron Naughton, Sam Lloyd resulted in a clever goal to Will Hayes. Mitch Wallis and Billy Gowers also scored majors to silence the home town supporters. At the other end Michael Walters took a clever backwards diving mark (catch), to goal. Not to be outdone, Brad Hill completed a desperate smother of a Johannisen kick to cause a turnover, which resulted in a goal to Matera. By halftime, the determined Dogs has worked their way to within one point of the home team.

The tight struggle continued in the third quarter with the Dogs chipping the ball forward to Tony Dickson who kicked truly. The Docker big men in the forward line were able to get their hands on the ball but were unable to convert. Caleb Daniel played as a defender for the Bulldogs and used his pace to out-maneuver the defenders.

With the situation looking worrisome for the Dockers, Mundy ignited the crowd by winning the ball in the half-back line, then running forward to receive a hand pass and goal from 50 meters. The play was open with the ball transitioning quickly from end to end. The frantic pace of the game slowly took its toll on the Bulldog midfielders. Sensing blood, the Dockers took advantage, and piled on three more goals only to see Bontempelli boot a long goal to narrow the Dockers lead to just six points at three-quarter time.

In the final quarter the Dockers booted four more goals with a much improved Brandon Matera kicking three of them. The Bulldogs though did not give up. At the 18-minute mark Sam Lloyd kicked truly and the Dogs came back to life. However, strong chases from Docker defensive forward Sam Switkowski and defender Ethan Hughes kept the pressure on the Dogs. A series of missed shots then cost the visitors any chance of a late comeback. Mundy was best on ground in his 300th AFL game. He now joins former Captain Matthew Pavlich as the only Western Australian based players to reach 300 AFL games.

Next week the Western Bulldogs have the challenge of the Richmond Tigers at Marvel Stadium. The Dockers travel to Adelaide to meet the improving Crows at Adelaide Oval.