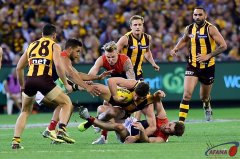 Pre-match drizzle at the MCG saw a slippery start to the match.  It was Melbourne who adapted first and almost 7 minutes into the match Brayshaw got the ball clear at the top of the 50 meter arc and kicked the goal with a long drop punt. Smith hit Breust on a lead 60 meters out, but Harmes gave away a 50 meter penalty for running in the protected area and Breust easily kicked Hawthorn’s first goal of the day. Jayden Hunt cleverly roved the pack at the top of the goal square and snapped from 15m out for Melbourne’s second.  Gunston was quick with the reply for the Hawks marking on the lead 30m out and converting the set shot.

Hawthorn took the lead for the first time in the match as a chain of quick handballs around the boundary line ended in Breust’s hands and he snapped around the body to add another 6 points.  They drew further away when Roughead caused a turnover at halfback and the ball ended with Smith in the forward line. Smith was running with O’Meara against Wagner and worked the ball over the top to O’Meara for the goal.  At quarter time it was a 14-point lead to the Hawks.

Billy Stretch brought the perfect start to the second quarter for the Demons as they outnumbered the Hawks with run into the forward 50. Stretch kicked the goal after receiving the handball over the top. The game became an arm wrestle as Melbourne tried to hold the Hawks.  Eventually the Hawks got away though and Shiels was able to find Mitchell Lewis at the top of the goal square and he kicked the set shot goal.

Melbourne had plenty of the ball but turned it over too many times.  Finally things worked out for them when Fritsch marked a floating ball 45 meters out  and went back to goal,, bringing the Demons back to a nine point deficit at the main break.

The third quarter was unremarkable until the 8 minute mark when Melbourne finally found Nathan Jones as the goal kicker reducing the margin to just two points; then Garlett on the end of a turnover added another to give the Demons the lead.  Breust eased Hore under the ball in the forward pocket and marked.  He made the most of the set shot to take the lead back for the Hawks.

Tom McDonald brought a smile to Melbourne fans' faces when he marked 40 meters out straight in front and he kicked his first goal for the match. Jake Melksham hit Jayden Hunt on a blistering lead and Hunt too, kicked straight for goal.  The Demons were on fire and Neal-Bullen extended their lead when he roved a marking contest where two Hawks spoiled each other and snapped a long goal.

Hawthorn worked back into the contest and eventually gained some ground up field a quick ball out found Gunston on a lead.  His kick was high long and straight and reduced the margin to 13 points just before three quarter time.  A missed shot from Melbourne with a minute to go in the quarter saw them lead by 14 points at the final break.  A great 28 point turnaround led by the likes of Clayton Oliver, James Harmes and Christian Salem who used the ball better than they had in the first half.

Gunston took the ball on a good lead outside 50, but again Harmes gave away a 50m penalty and kicked from 20 meters out and brought the margin back to 9 points.  Shiels marked a long ball in from Wingard close to the behind line.  Despite the tight angle, he goaled from just 3 meters out.

A good contested mark by Moore at the top of the 50 meter arc and a dish off to Roughead for a long goal gave the Hawks the lead for the first time in the last quarter. Melbourne were hard and desperate in their forward line, with forced a turnover and found Lockhart on a diving lead straight in front and his goal restored their lead.   A minute later they again went forward and the pressure on the Hawthorn defenders turned the ball to Harmes, who drove the ball home from 25m out straight in front.

Max Gawn on the wing turned the ball over and Moore was able to chip a kick to Breust who reduced the margin to 4 points from 25m out.  The Demons were able to add one more behind before holding on the last few minutes as Hawthorn pushed hard to no avail and the Demons held on to win by 5 points.