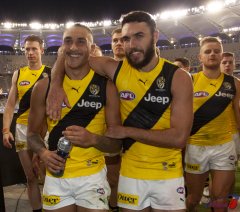 The Adelaide Crows, Richmond and the Western Bulldogs also banked impressive wins while the Sydney Swans held on to defeat the fancied Essendon at the SCG. Finally, the Melbourne Demons somehow managed to snatch victory on the road against the Gold Coast Suns, scoring twice in the final minute to win by the slimmest of margins.

The Magpies and Cats remain the teams to beat while the Crows have quietly steadied the ship to send them climbing up the AFANA AFL Power Poll into 5th place.

Here’s the six word summary Power Poll for round eight!