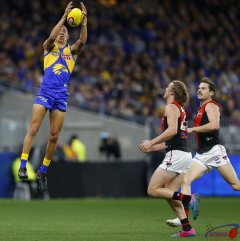 Essendon were hesitant and lacked purpose. For most of the night they were on the defensive. When they brought the ball out of defense it was mostly chipped sideways. Instead of taking the game on and running the ball through the center they slowed their momentum and gave the Eagle defenders time to set themselves and block any attacks.

The Eagles defense led by Jeremy McGovern (five intercept marks), dominated in the air and outplayed the Bombers by getting numbers to the contest whenever the ball hit the ground. Dyson Heppell, David Zaharakis and Zach Merrett worked hard for the Bombers, but they were unable to operate with their usual precision as the Eagles pushed to the contest and closed a midfield web around the ball carriers. Essendon matched the Eagles in contested possessions but the Eagles’ tackling forced Essendon into rushed disposals and turnovers.

West Coasts’ midfield rotating combination of Andrew Gaff, Dom Sheed, Luke Shuey, Jack Redden and Eliott Yeo broke even in center clearances and dominated at stoppages around the ground, to provide drive and purpose for the home team. Dylan Shiel looked dangerous for the Bombers, at times, but did not involve himself in enough contests. Josh Begley made the most of limited opportunities to boot three goals and was the only effective forward for Essendon.

Josh Kennedy was the focus for the Eagles’ attacks, taking eight marks. However, he finished with just 3 goals 5 behinds from nine shots. Butchered shots at goal became a West Coast team theme and was the only reason Essendon did not receiving a comprehensive thrashing. There were few winners across the field for Essendon. Tom Bellchambers worked hard in the ruck for the visitors and had the better of Eagles’ ruckman Tom Hickey. Bomber defender, Cale Hooker, kept Jack Darling quiet for most of the game but there was little else to please Essendon supporters. Speedy Essendon rebounder Adam Saad was smothered by Eagles tagger Mark Hutchins and Essendon’s  Irish import, Conor McKenna, could not find the space to show his skills. The Eagles had done their homework. They know that their zone defense is vulnerable to fast paced attacks, so they cut the quickest Bombers, McKenna and Saad, out of the game.

The game turned a little when the Bombers booted the last two goals of the third quarter and then the first two of the final quarter to move within striking distance of the Eagles, with eight minutes to play. However, the Eagles steadied and goals to Liam Ryan and Jack Petruccelle quickly snuffed any chance of an unlikely victory.

The Eagles' only concern from the night was a report on Jeremy McGovern for pushing Essendon youngster Matt Guelfi after Guelfi disposed of the ball. Guelfi collected a plastic chair as he fell into the fence and was taken to hospital for assessment of suspected concussion and possible broken ribs.

Essendon also have a nervous wait as Tom Bellchambers may be asked to explain a high bump on Luke Shuey.  The Bombers’ Mason Redman was reported for misconduct against Oscar Allen.

Next week the Eagles meet Hawthorn at the MCG. A win will bolster West Coast‘s position in the top four. Essendon will play the GWS Giants at Marvel Stadium in another Thursday night game. A loss to the Giants will virtually end the Bombers' chances of making the finals.