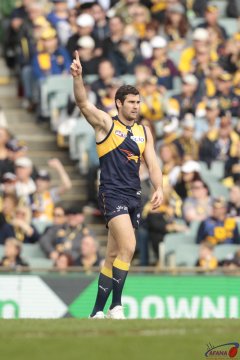 Hawthorn as has become their custom, worked the ball to safe options to capitalize on their chances of keeping possession and eventually had the ball inside 50 to Breust for their first goal.  Their next foray forward was a little more haphazard though.  A long ball over Nash’s head inside 50 saw him beat Oscar Allen to the ball and kick around his body to register the six points.

Then Worpel’s mongrel drop punt hit Gunston like a bullet and he was good enough to hold on and goal from the set shot and the Hawks looked to be up for the fight today. Hawthorn continued to make headway with some unorthodox footy but their work came unstuck with a turnover in the middle of the ground and ended with Darling roving the back of the pack for the Eagle’s second goal and that was backed up a few minutes later with a behind, then a goal for their third.

At the quarter time break the Eagles lead by 2 points and looked the more attacking team when they could get the ball back from the Hawks as Sheed, Cripps, Gaff and Hurn dominated around the contest.  As the second quarter started the rain grew heavier. Jamie Cripps kicked the Eagles first goal for the term six minutes into the second quarter on the end of a smart kick to the square by Ryan.  Ryan again assisted minutes later when Yeo was a better option and received a quick handball before slotting the ball home.  Ryan finally got to be the hero when he gathered the ball in the pocket and wobbled a snap through the middle at the 15-minute mark of the quarter.  The Eagles were suddenly out to a 20-point lead.

Hawthorn finally got a look in as Ceglar took a good contested mark, but his kick from 30 meters out hit the post and after another Eagles behind, 20 points was the margin at the long break. The rain had ceased during the break and the ground remained slippery.  But when Worpel was taken high around the throw in it did not affect him as he kicked straight from 45 meters out in the pocket to goal for the Hawks.

The game became a slog, and eventually it was veteran Shaun Burgoyne who kicked a long goal for Hawthorn after a strong intercept mark by Sicily on the wing.  The Hawks wasted a few opportunities to take a good lead and it was Oliver Hanrahan with his first goal for the Hawks, roving a good contest provided by Nash, and kicking truly, to finally cash in on their hard work.

The lead was soon wrested back though when Luke Shuey, with the benefit of a 50 meter penalty for not returning the ball properly, kicked an easy goal for the Eagles.  A chaos ball to the top of Hawthorn’s goal square saw Isaac Smith gather and float the ball over the defender’s heads for a goal and put their nose back in front late in the third quarter.

With a five-point lead Hawthorn had given themselves a chance to upset the highly favored Eagles going into the last quarter. But it was ghosts from quarters past as Liam Ryan quickly wiped that lead away marking a kick meant for Kennedy from Cameron on the forward flank.  And then Darling somehow was awarded a free kick in the marking contest and converted from close range.

The Hawks responded and took the ball the length of the ground with fast ball movement to find Henderson in the goal square and the easy goal on the run. A Ceglar shot from 50 went left for a behind to level up scores as the rain came down again.  Daniel Howe was crunched by a West Coast player 25 meters out from goal and with his goal, Hawthorn now pushed out to an 8-point lead just past halfway through the quarter.

It looked like the Eagles would hit back quickly when Kennedy off balance swooped on a poorly spoiled ball, then his snap shot hit high up on the post when he looked sure to goal. But his forward twin in Darling would soon make amends marking in a strong contest and calmly kicking his fifth goal of the match and bring the margin back to one point.

The Eagles pressed hard to regain control, a behind snapped with two minutes to go by Brad Sheppard put the Eagles level. At the one minute markr Jamie Cripps roved the pack at the hot spot and goaled to put the Eagles in front by a goal.  The Hawks tried to make a last-ditch effort to go coast to coast, but the Eagles locked the ball up and held on for the win.