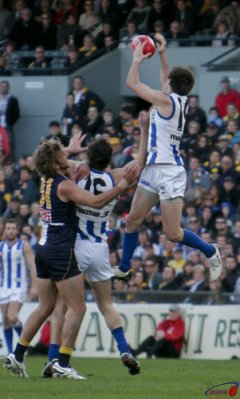 Assistant coach Darren Crocker paid tribute to Wright, “You’ve earnt the respect and trust of your teammates, and you’ve endeared yourself to everyone at North Melbourne ... it’s been tough ... with your injuries, but the way that you’ve handled that and the way you’ve embraced the younger guys has been a real credit to you. You’ve grown as a person and ... you’re a bloody good footballer ... You always want to play finals … you are always able to lift on those occasions and play your best football when it was most important. Once a Shinboner, always a Shinboner.”

Coach Rhyce Shaw echoed Crocker's sentiments, "He's done everything possible ... but his body just hasn't allowed it. It's a disappointing end ... but he's been such a fantastic contributor to us ... The stories that have been told about Sam, like the big finals where he's played some really good footy and stepped up in those big games … he's been a fantastic player for the club. Everyone is really proud of what he's been able to achieve."

Some of those big game moments were shown on the big screen at a training session. One of those was during the 2014 Elimination Final against Essendon. North was trailing by 33 points midway through the third term and staring down the barrel of an embarrassing loss. Essendon was streaming forward once again with a kick intended for Jobe Watson. Wright sprung up to take an intercept mark (catch of the ball). North rallied to defeat the Bombers by two goals.

The day after Wright announced his retirement, the club announced the appointment of Rhyce Shaw as the senior coach for the next three years. Club chairman Ben Buckley says Shaw was exactly what North was looking for, "... we embarked on the search for our new coach, and I described the type of person we were after ... someone of the highest integrity and someone who could get the very best out of the players ... A people person who could build strong relationships ... and take us forward ... We have found that person in Rhyce... Since Rhyce took over ... we saw a transformation and a response ... that encouraged us, inspired us and reassured us ... He was the best fit for our club ...".

Shaw played 237 games for Collingwood and Sydney between 2000 and 2015, and is a member of the Swans’ 2012 premiership side. Following his retirement, he spent four years coaching at Sydney. Two of those were in charge of the NEAFL side where he coached the team to two consecutive minor premierships and Grand Final appearances. He left Sydney and joined North at the end of 2018 as a defensive coach.