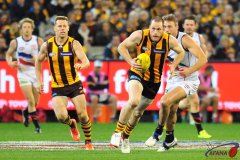 Hawthorn champion Jarryd Roughead, who has spent most of the season playing with the Box Hill Hawks in the VFL and mentoring younger players, has been recalled for just his eighth game for the year. It will be his farewell game as he has announced his retirement..

Roughhead, 32, debuted in 2005 after being the second selection in the 2004 draft and went on to captain the side, earn All-Australian selection and be a member of several premiership sides. In making the announcement, Roughead said, "I’ve had an amazing 15-year journey ...

I am content with everything I have achieved in my career ... and I know it’s the right time for myself, my family and the club. To play this great game for such a long time and to have experienced success like we have is something I’ll never take for granted. I want to thank everyone at ... Hawthorn ... for supporting me through all the highs and lows. The bonds and friendships I’ve made will last a lifetime. "And lastly, a big thank you to the Hawthorn members and supporters ....".

One of the lows in his career was being diagnosed with a recurrence of a melanoma in 2015. He missed that season to have it treated and returned in 2016.  Coach Alastair Clarkson has been the only coach Roughead has known in his AFL career and praised the star forward, "Rough has been an outstanding custodian of the brown and gold for such a long time. His football smarts, resilience and intensely competitive spirit are what make him one of those rare, special players ... Like any player ... Rough has had to endure both the highs and the lows that life can sometimes present ... he has always demonstrated courage, humility and dignity. We are lucky to have witnessed such an extraordinary career."