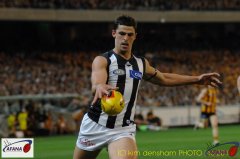 In the wake of the COVID-19 international pandemic, the AFL has decided to cut the season to 17 rounds and suspend all second-tier competitions and talent pathways until the end of May. There is also the possibility of Round One being postponed. It was due to commence on Thursday, March 19th (US EDT). The shortened season would see teams play each other just once. The AFL had previously announced that no fans would be allowed to attend matches. While some of the Round Six AFLW games had attendances, others did not. The remaining AFLW matches will be played with no fans in attendance. AFL boss Gil McLachlan said at the first sign of any player testing positive would bring the competition to a halt for a minimum of two weeks.

In early March, it was reported on SEN that a Fremantle player thought he may have been exposed after meeting a friend who had just returned from China. However, all tests came back negative. Just as the league was making their announcements, Collingwood captain Scott Pendlebury reported symptoms but wascleared within 48 hours.

The AFL is also currently talking to the AFLPA about players taking pay cuts. McLachlan himself and other AFL executives would take pay cuts to "... save as many jobs as possible ... ". He said in part in a statement, "We've got 40 weeks to get a 17-week season away. If it's done by the end of September, fabulous, but if we need more time, we'll do that. That's our commitment to our industry, This unprecedented community challenge requires unprecedented community response. Football has been around for 160 years, it's been challenged and tested, but footy will find a way ... ".

The AFL laid out the following plans - for now:

It has been reported from unidentified sources that the AFL has told the 18 clubs that they will need to come up with $3-$5 million to offset the impact of the virus outbreak. The AFL will only step in to assist if clubs cannot find ways to cut costs of their own operations. Given that the financial status varies with all clubs, the AFL will not place a percentage of savings for each club.

This article was mainly about the effect the virus is having on the betting with so many sports events being postponed or canceled. One betting agency director said he was turning to Mexican soccer and Australian football and rugby

And in the New York Times at https://www.nytimes.com/2020/03/16/sports/coronavirus-not-canceled.html

This article focuses on what sports are available. In one passage, it is "... In women’s Australian rules football, Greater Western Sydney 26, Adelaide 21. These scores, which would ordinarily be buried in the blizzard of worldwide sporting results, stood out this weekend. Not because the games were particularly remarkable, but because they were played at all."