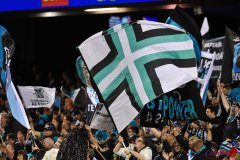 The second half was a procession with Port doing as it pleased. Adelaide Coach Matthew Nicks looked bewildered in the coaching box as his younger players were out-muscled and his veterans outclassed. Young ruckman Riley O’Brien was best for Adelaide as he competed well for four quarters, but there wasn’t much else to like from a Crows point of view. The most damning statistic to come out of the game for Adelaide was that despite being thrashed in possession count 259 to Port’s 363, Port won the tackle count 61-45.

The Adelaide hierarchy made the choice to commence a rebuild and to their credit, they "blooded" some youngsters such as Ned McHenry, Fisher McAsey, and Chase Jones, but by leaving experienced players such as Bryce Gibbs out of the side they have put immense pressure on the more senior players, who so far have struggled to perform.

Both teams head up to the Gold Coast “hub” for round three where the Power will start heavy favorites against Fremantle, while Adelaide contends with the Gold Coast Suns, fresh off arguably their greatest win as the young Suns took down the West Coast Eagles on Saturday night.