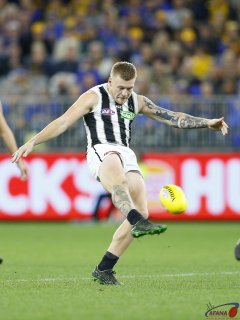 Geelong started the game with the intention of using a kick and catch tactic to retain possession of the ball and structure their sorties into attack. Collingwood were prepared for this and chased and tackled to pressure the Cats' ball carriers and force turnovers. In addition, the Collingwood defenders frequently peeled off their opponents to add numbers to midfield stoppages, resulting in the Pies winning more contested possessions in the middle of the ground.

The Pies owned the center corridor with quick movement of the ball forward which gave small forward de Goey every chance to finesse. For most of the match Geelong's steadiest backman, Harry Taylor played on de Goey. Taylor is an experienced and wily defender but did not have the skill to match de Goey's mercurial brilliance. Will Hoskin-Elliott added spectacle to the game with a high mark (catch) over Jake Kolodjashni, which resulted in an accurate set shot on goal. Brodie Grundy dominated in the ruck for Collingwood, but Patrick Dangerfield and Cameron Guthrie won eighteen clearances between them to keep Geelong competitive. The loss of Adam Selwood, to a hamstring injury, early in the match unsettled Geelong's midfield structure, but Jack Steven and Sam Menegola worked purposely in tandem to body-up to Treloar and Pendlebury.

Collingwood's de Goey had two goals on the board within the first six minutes of the game. It took eighteen minutes for the Cats to get their first major score (goal). Tom Hawkins grabbed the ball from a throw-in, as loose Collingwood defense allowed two Cat players float free in front of goal. Hawkins chipped a kick to Jordan Clark who marked and kicked truly to give life to the Cats. The unlucky Clark left the field later in the game with a shoulder injury.

A clever one-step snap by Josh Daicos put the Pies further ahead early in the second quarter.  When Geelong attacked they were stopped repeatedly by Darcy Moore who kept a tight rein on the big Fijian Cat, Esava Ratugolea. Collingwood defender Jordan Roughhead matched Tom Hawkins, forcing the big forward to head up field for kicks. With Geelong continually under pressure in the packs, they were prevented from playing their possession game and were reduced to "kick and hope", rather than launching attacks with purpose.

A heavy shower of rain in the third quarter made it even more difficult for the Cats to maintain their structure. Despite this, wingman Zach Toohey found same forward space early and the Irishman finished accurately, to give the Cats some hope. Collingwood veteran Scott Pendlebury showed his class in the difficult conditions, to feature twice in a chain of possessions which ended with Taylor Adams, who booted the Pies fifth goal. The Cats became more competitive when they switched to a wet weather game style and knocked the ball forward at every opportunity. Geelong defender, Mark Blicavs, used his athleticism to keep the pressure on the Collingwood forwards. Jamie Elliott threatened to break free at times for Collingwood, but finished with just one behind (worth a point). Geelong's Gary Ablett (Jr) tried to work his way into the game but lacked  penetration.

The Cats rebounded early in the final term when Tom Hawkins kicked long to speedster Gary Rohan, who marked and kicked truly to narrow the deficit to nine points. A goal from some de Goey soccer magic then gave the Pies breathing space. In response, Geelong superstar Patrick Dangerfield, who had worked hard all night, booted long to Cameron Gutthrie,who marked and slotted a goal at the nineteen minute mark, to keep the Cats in the game.  However, the last five minutes belonged to de Goey alone, who booted two more goals to seal the win in an emphatic fashion.

Next week, Collingwood stay at Optus Oval to meet the West Coast Eagles in a game that will be crucial to both teams. Geelong remain in Perth to play the Fremantle Dockers.