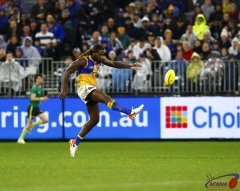 The West Coast Eagles withstood a last quarter challenge from the St Kilda Saints to secure a place in this year's final series. The Eagles, struggling with injury to eight of their first-choice players and losing defensive linchpin Jeremy McGovern at the main break, looked gone, after St Kilda surged to the lead midway through the final quarter. However a goal to Josh Kennedy and then a sweeping handpass from Kennedy to Tim Kelly, put the Eagles back in front with twelve minutes to play and the Saints were unable to respond. It was a morale sapping loss for the Saints; made worse by a conversion from a soft free kick paid to Eagle forward Oscar Allen in the goal square and then a free kick just before the siren for an ill-disciplined "tummy tap" by Bradley Hill on Tom Cole, which added to the Saints' pain. The Saints will now have to win their final match, against the Giants, to make the finals.

The Saints played a running game with the intention of negating the marking (catching) power and the air dominance of the Eagles. Initially it worked. Early goals to Paddy Rider and Tim Membrey had the Eagles on the defensive. However, whenever the Saints tried to bomb the ball long to Max King and Membrey in attack, the Eagle defensive pair of McGovern and Tom Barrass intercepted by using their ability to read the ball in the air. The Saints did most of the early attacking for the first quarter but were unable to convert. At the other end the Eagles were ruthlessly efficient whenever they attacked. Darling marked and scored from 50 meters and a poor defensive kick by Saints' defender Callum Wilkie resulted in a turnover and goal to Liam Ryan. Just before the end of the first quarter, a bouncing snap by Jack Lonie gave the Saints reward for effort as it passed outreached fingers to be called a goal, after an extended video review. The Eagles fought back in the second quarter to hold the Saints scoreless while booting three goals and five behinds (worth a point each) to regain the lead. The Eagles used their air superiority to out-mark the Saints around the ground, and particularly, in attack. However, a hamstring injury to McGovern at the end of the quarter threw the Eagles off balance and gave the Saints renewed hope going into the main break.

The Saints' cause was helped by rain in the third quarter. The ball became slippery and negated the Eagles' high flyers. The game became a struggle for territory as players knocked the ball forward at every opportunity. The Eagle defenders withstood the Saints' siege with the Eagles adding three behinds for the quarter and the Saints four. Hunter Clark, Jack Billings and Jack Steele were the driving force for the Saints in the midfield and Andrew Gaff and Tim Kelly continually put the ball into attack for the Eagles. The ruck duel between Paddy Ryder and Nic Naitanui was a highlight of the match, with Natainui narrowly winning the honors for the Eagles.

An early goal to Seb Ross and soccer style finesse by Dan Butler in the goal square, resulted in early final stanza goals to the Saints. An accurate snap by Rowan Marshall, at the seven-minute mark had the Saints on a roll. But then the Eagles dug in. At the fourteen-minute mark, the Saints defenders left a hole for Kennedy to run into and mark. His goal was the first of four goals that would bury the Saints.

Next week is the final round of the regular season. The Eagles will be relieved it is against the team with the league's longest injury list, the North Melbourne Kangaroos. A big win against the Kangaroos could give the Eagles a position in the top four. The Saints will play the Greater Western Sydney Giants in a cut throat battle to make the final eight.