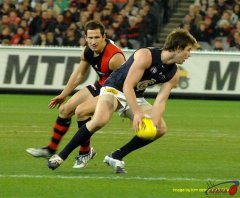 In early September, Pearce Hanley was the first to announce his immediate retirement to focus on his business ventures. Hanley, 31, was recruited from Ireland by the Brisbane Lions and debuted at the age of 19 in 2008. He played 129 games for Brisbane before being traded to Gold Coast in 2016. He played a further 40 games with the Suns. He had struggled with injuries over the past few seasons. It was not any major injury which led to his decision but rather niggles which made him realize his body had enough.

Reflecting on his AFL career, Hanley said he hadn’t taken the decision lightly but was looking forward to the future, “I feel good, it’s obviously been on my mind for a while and I made the decision ... and haven’t had any regrets ... it’s ... a big decision but I’m ready for it.”

Hanley admitted that it took a couple of years to adjust to life in Australia. He also had to give up his party ways, telling the AFL website in 2015 that "I think I was drunk my first two years ... “I still had a great time and it’s made me who I am now. My professionalism has got a lot better and ... and I’ve definitely pulled my head in ... I got in a bit of ... of trouble. The club were very good to stand by me. I thought I wasn’t going to be given another contract and ... be sent home ... from there I turned my year around."

He was interviewed by the Mayo News during the summer and said it would be very hard to return to Ireland, saying Australia is home now. He established a gym on the Gold Coast with a friend and his partner is from Queensland, so he is well settled in the area.

General Manager Jon Haines, thanked Hanley for the significant contribution he had made, “ ... we would like to ... thank Pearce for the impact he has made ... With an emerging group, the need to have experienced players who can help drive and lead our playing group has been critical to the club’s development ...".

Younger brother Cian was also recruited to Brisbane in 2015 as a rookie. His first two seasons were ruined  by injury. He played in the NEAFL in 2018, never made his senior debut and was delisted at the end of 2018.

Just days after Hanley announced his retirement, fellow Irishman and Bomber Conor McKenna announced that he will retire and return home. He played 79 games for Essendon since being recruited in 2014. He signed a four year contract extension in 2017 but said the time was right to head home. McKenna, 24, said, "It's been a difficult year for everyone, but it's also been a chance to take stock and weigh up several things in my life ...".

McKenna himself has had his share of difficulties during the season. He tested positive for the Corona virus earlier in the year, causing an Essendon game to be postponed. He went into the required 2 week quarantine despite two subsequent negative tests. However, during that time, he breached AFL protocols and was suspended for a week.

McKenna is understood to have had bouts of homesickness, "I've made no secret ... that at some point, I'd want to be returning home ... and I've been weighing up the decision recently. I will always be grateful for Essendon's support ... since I arrived ... ". During the AFL hiatus earlier this year, McKenna did return to Ireland for a visit and there was speculation as to whether or not he would return to Australia.

Essendon's general manager Dan Richardson said McKenna and the club had open and honest conversations over the years about the possibility of him returning home, "We understand Conor's decision to return home to be with his family and while we are disappointed to lose a player of his calibre from our list, he departs ... with our support ... It has been a very trying year for Conor personally, too, but ultimately we accept that the pull to return home was too strong. We will continue to provide our full support to Conor ... We thank Conor for his contribution to the club and wish both he and his family all the very best ... ".

McKenna, who signed a four year contract extension in 2017, is contemplating a return to Gaelic football. He never did make a senior team as he was only 18 when he signed with Essendon. He said he would explore the possibility upon his return to Ireland.

Bryce Gibbs, 31, will retire at the end of the season. His final game, against his former club Carlton will bring his career tally to 268. He was the number one draft pick in 2006, debuted in 2007 and played 231 games with the Blues, kicking 137 goals. He won the club best and fairest in 2014 and finished in the top five eight times. He requested a trade from the Blues in 2016, citing a desire to return home. A suitable deal could not be made, but he got his wish at the end of 2017. In his first season with Adelaide, he played all 22 games and finished fourth in the best and fairest count.

Of Carlton he said, “The Carlton Football Club gave me the opportunity to fulfil a boyhood dream and I cannot thank them enough. It was home for 11 years and the club shaped me into the person I am today ... I’m looking forward to playing against some of my lifelong friends one final time.”

Of the Crows, he said, “I’m so thankful to the Adelaide Football Club for giving me the chance to come home ... and be closer to friends and family ... I would have loved to have played more footy ... and it’s an incredible environment ... and I’ve really enjoyed helping and trying to positively influence the younger blokes ... next year, there would have been limited opportunities for me ... and the time is right to step aside and let the next generation grab their opportunity.”

Senior Coach Matthew Nicks paid tribute to Gibbs and the way he has handled himself during a challenging season, “Bryce has shown tremendous leadership ... despite not playing as much football as he would have liked. His overall attitude and his desire to pass on his knowledge and experience to our younger players has been first class ... he will get an opportunity to play this weekend against his old side which will be a great farewell for him ...".

Just as GIbbs was announcing his retirement, so was Carlton's Matthew Kreuzer, Kreuzer, 31, played 189 games in his 13 seasons. The past few seasons, including this year, has seen him hampered by injuries. Drafted in 2007, he quickly became a fan favorite with the sound of “Kroooooozzzz” reverberating around the stands whenever he got near the ball.

Kreuzer said he was grateful for all the support he received throughout his career, “I’ve grown up at the Carlton Football Club ... I’m proud to have worn that Navy Blue guernsey for over a decade. Footy has thrown a lot of challenges my way but the one thing that got me through was how much I loved running out with my teammates and the incredible roar of that Carlton crowd ... There are so many people to thank for supporting me throughout my career. My teammates, coaches, staff and especially my family ... I am proud to say I gave everything I had ... and am grateful to all our members and supporters ... ".

Senior Coach David Teague said the club was in a great position moving forward because of people like Kreuzer,  "Kreuz was a fantastic footballer ... and he should be incredibly proud of that. What he should be most proud of is the impact he has had on this football club beyond game day. He is one of the most humble, selfless, kind-hearted people you could ever have the pleasure of meeting. Every young player who has come to Kreuz for advice or guidance, he has gone above and beyond ... Those are things that people don’t see but they make you a great teammate and great club person ... Our club has been privileged to have not only a player but a person of the quality of Kreuz ... ".