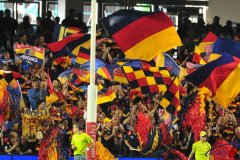 CHRIS MCDERMOTT
117 games 1991 - 1996
The inaugural captain led the club to their first win in the AFL with an upset victory against Hawthorn in the opening round of 1991. Prior to joining the Crows at the ripe old age of 27, he played 276 games with Glenelg in the SANFL. He also captained the state team and was team captain for their first Preliminary Final in 1993, He was named club champion and All-Australian in 1992

MARK BICKLEY
272 games 1991 - 2003
Was a teammate of McDermott's during the club's early years and captained the side in their two premierships in 1997 and 1998. Noted for his courage, toughness, and versatility, he began as a defender but went on to be a reliable midfielder. He was named best club man three times and captained the club in 102 games over four seasons. Upon retirement, he became an assistant coach and was appointed caretaker coach in 2011 after Neil Craig stepped down

Ed. note: Footy Show personality Sam Newman did not have a particularly good year in 1997. He was a Crow-basher (at least on air anyway). Among his woes was a DUI suspension, a broken leg when his date accidentally ran over it in his driveway, a broken nose from an irate ex-boyfriend of one of his amours, and Adelaide's first premiership. Bickley was a guest on the show in 1998 and joked that he hoped the club could win again in 1998 to make that year as miserable as 1997 was for Sam

TYSON EDWARDS
321 games 1995 - 2010
Sits second behind Andrew McLeod (340 games) on the club's games record list. Edwards made his debut in 1995 as a small defender but became one of the best midfielders in the game at the time and was a fan favorite. He kicked 192 goals, played in both premierships, was second in the best and fairest count three times, and was a fan favorite and voted the Members’ Most Valuable Player in 2002, 2004 and 2006. He retired in 2010. before retiring in 2010. Son Luke was overlooked by the Crows as a father-son selection and drafted by the Eagles in 2020

NIGEL SMART
278 games 1991 - 2004
Smart began in the SANFL in 1988 but joined the Crows for their debut AFL season in 1991. Made a name for himself as a defender but was also dangerous in front of goals, kicking 116, including three against North Melbourne in the 1998 Grand Final. He was the first South Australian to be named All-Australian (back pocket in 1991). He again received the honor in 1993 and 1998 and was the first Crow to reach 250 games. One incident for which he is famous happened during the 1992 preseason. The coach Graham Cornes organized a session involving hot coals. Smart walked over the burning coals barefoot, severely burning his feet but returned to play shortly after. He retired at the age of 35 in 2004. Smart served as a board member and administrator and was a key to the club's move to the Adelaide Oval and setting up the AFLW team