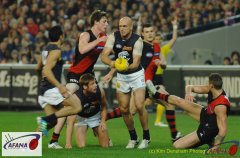 A standout ruckman, Merv McIntosh played 217 games for Perth in a war-interrupted career between 1939-1955, winning a premiership in his final year. A three-time Simpson Medalist best-on-ground in state games involving WA) and Sandover Medalist (WA Brownlow equivalent), McIntosh also claimed Perth’s Best and Fairest award seven times in his 11-year career. His performance in the 1955 WAFL Grand Final was outstanding as he led his side to a two-point win after they trailed by 34 points at half-time.

Oatey was an excellent player but is recognized for his outstanding coaching career in the SANFL. Between Sturt and Norwood, he has 10 premierships to his name and coached over 500 games. He also had a stint at West Adelaide. The SANFL Grand Final best-on-ground medal is named in his honor. It was designated as such in 1981 while he was still coaching.

Debbie Lee was recognized for her years of service to the game as both player and then administrator. After a stellar on-field career, Lee led the creation of the first women’s team in Melbourne’s western suburbs (YCW Spurs), to her current role as General Manager, Women’s Football at the Western Bulldogs.

Judd was inducted in his first year of eligibility after a stellar career with West Coast and Carlton, Wiley was recognized as a great of the WAFL in the 1970s and 1980s. He was also a star for Richmond. Burke was a star for the Saints.