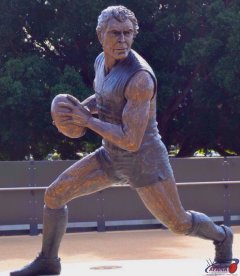 As good as he was on the field, Ebert was equally revered off it. Last year, he was recognized for his work with Port Adelaide's Community Youth Program, which educates primary school children about healthy lifestyles, healthy relationships and STEM, leading to him being named a national finalist and the South Australian Local Hero for 2021 as part of the Australia Day Awards. He also worked with the club's Power to End Violence Against Women program.

In a statement, AFL CEO Gillon McLachlan paid tribute to Ebert, "Russell Ebert was an extraordinary footballer and his record attests to that as the only person in SANFL history with four Magarey Medals, coupled with multiple premierships and nearly 400 senior games just for his beloved Magpies, alongside his brilliant state career and a season with North Melbourne in the VFL. "As a young fan of the game in Adelaide, even when watching him as an opposition player, you couldn't help but admire his high marking (catch of the ball), his one-touch ball-gathering, his brilliant attacking handball and his exceptional kicking skills on both sides of his body, as he was taking your side apart. All while being an incredibly fair player who relied on his skills while being strong and brave. As his time in football concluded, Russell then truly blossomed as a humble but strong leader in wider society, not just football, and across more than 30 years he diligently worked every day in seeking to improve his community, using his profile and leadership to show people better ways to treat each other, and assist those who were struggling. The child in me will always admire the great footballer but the adult that I am is in awe of what Russell Ebert was as a man, and his loss after bravely confronting his illness is devastating for his family, for his club, his many fans and for the state of South Australia, where he has given so much. "He was everything you would hope to be in a man, and perhaps the best of all of us."

Port Adelaide president David Koch was among those who praised Ebert's contribution to the South Australian community, “No person has done more for the Port Adelaide and South Australian football community than Russell Ebert. He represented everything about Port Adelaide yet had the power to transcend rivalries and connect with the entire football community and beyond. Born and raised in the Riverland of South Australia, Russell made Alberton his home from 1968 to include a club record 392 games, three premierships, six best-and-fairests and of course that extraordinary achievement of four Magarey Medals. But Russell’s remarkable contribution surpassed just the football field. He was equally revered in the community as he was on the playing arena. From countless voluntary visits to hospitals and nursing homes, to raising money and profile of local charities, to the establishment of his pride and joy - the Power Community Youth Program, Russell’s first thought was always ‘How can I help others?’. “Even in the last few weeks, despite his ongoing battles, Russell would ask how everyone else was going. It was mark of who he was. Right until the end, Russell was the most selfless person you could meet. During its 151-year history there have been so many champions of our club, and a handful of Legends... Russell Ebert stands tall among the Legends of Port Adelaide... His feats on the field are well chronicled and admired, but it’s his feats off the field which set Russ apart. This is a man who made his family, his club and his community incredibly proud ..."

Fellow Port Adelaide Football Club great John Cahill said Ebert was a "once in a generation champion", "We all respect his wonderful sporting achievements, but as a husband, father, grandfather, brother he truly shone," he wrote on Twitter.

The Adelaide Football Club also paid tribute to Ebert, tweeting: "Russell Ebert has far too many honors to fit into one tweet. All we can say is, the football world and SA is lesser without you."