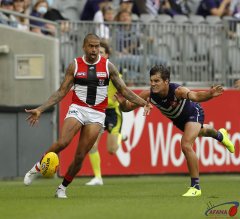 A slingshot attack from defense ended with Dan Butler running into an open forward line and booting St Kilda’s first goal, five minutes into the second quarter. This was followed minutes later by a goal to Jack Higgins who was beginning to dominate in the mid-field. The Dockers had an edge in the ruck with the combination of Sean Darcy and Lloyd Meek proving too tough for Rowan Marshall. However, at center bounces and stoppages, Brad Crouch, Jade Gresham and Sebastien Ross were winning the clearances and giving the Saints first use of the ball. The Dockers fought back in the middle of the second stanza with a goal to Lobb and a clever snap to a busy Andrew Brayshaw (40 possessions for the game).

Early in the third quarter the Dockers’ ruckman Sean Darcy twisted an ankle and left the ground. His ruck partner, Lloyd Meek, rose to the challenge and took a strong mark (catch) to slot the Dockers sixth goal. To this point, St Kilda had taken more shots at goal and had control of the mid-field but had only registered two goals (worth 6 points each). Young spearhead Max King, who had only two possessions in the first half, broke the shackles put on him by Docker defender Alex Pearce and took three strong marks, to boot three goals in five minutes. Jack Higgins then chipped in with two quick goals and the Dockers were all at sea.

The final quarter, characterized by the Dockers keeping up the attack, but poor kicking resulting in St Kilda taking seven intercept marks and holding the increasingly frustrated Dockers to account. At the 18-minute mark, Dockers’ debutant Nathan O’Driscoll gave the home supporters hope with a clever goal from the boundary. St Kilda steadied to hold repeated Docker attacks and finally sealed the game with a mark and fourth goal to King at the 22-minute mark. The Dockers fought on with a goal to Travis Colyer but could not pierce the strong St Kilda defense.

If St Kilda can get the ball to Max King enough times, they will be one of the rising teams of the competition, as their mid-field is competitive, and they have the defensive swing of Brad Hill who can be devastating when he is playing well. The Dockers need to get David Mundy and Nat Fyfe back into the team, if they are to have any chance of making the finals this year. Next week, St Kilda meet Richmond at Marvel Stadium and will have their chances there, especially if Dustin Martin is not playing. The Dockers meet the wounded West Coast Eagles in a western derby at Optus Stadium. The Eagles are struggling to field a team due to COVID protocols and the Dockers will be aiming to improve their general play.