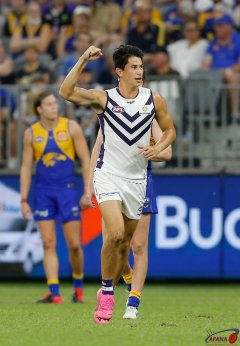 The Dockers kicked six consecutive goals after Kennedy’s goal. Nic Naitanui broke even in the ruck against Lloyd Meek and Rory Lobb. However, the Eagles struggled to capitalize on his tap outs. Jack Redden and Andrew Gaff got plenty of the ball but were always under pressure from the Docker mid-fielders Jordan Clark, Will Brodie, and Michael Walters. Consequently, the Eagles attacks were cut-off at half back and young players such as Clark, Heath Chapman, and Brandon Walker used their pace to stream through the center corridor to deliver the ball forward. Darcy Tucker also showed poise on the wing until he was concussed in a tackle early in the second half. In the absence of regular ruckman Sean Darcy, Lloyd Meek started strongly in the ruck for the Dockers but faded as the game continued. Naitanui is now used as a burst player for the Eagles, and he is highly effective when he is on the ground, particularly at bouncedowns, but he appears to not have the stamina to play a full game.

The Eagles went scoreless in the second quarter with the Docker defenders Brennan Cox, Luke Ryan, Alex Pearce, and Heath Chapman dominating their opponents. Jack Darling and Josh Kennedy were starved of opportunity and Liam Ryan tried at times but didn’t show his usual class. West Coast intercepted many Fremantle attacks when the Dockers kicked the ball high and long into attack, with McGovern acting as the main intercept marker (catcher).

The ball was frequently turned over to the Dockers in the midfield, either through Docker pressure or poor skills shown by some West Coast players. Fremantle finished the game with 10 goals 7 behinds directly resulting from intercepts. The Eagles had nearly as many intercepts, but these only resulted in 1 goal 3 behinds added to the board. The Dockers avoided using the boundary line when they gained possession and shifted the ball either straight down the center corridor, or to the more open side of the ground, where they could use their pace.

The start of the second half was highlighted by Naitanui winning two consecutive center bounces with powerful knocks forward that resulted in two goals in two minutes. The second was a one-man effort when he won the tap and ran forward to gather a loose ball and boot a goal.

The Dockers replied with goals to Rory Lobb, Matt Taberner, Blake Acres, and the game was virtually over at three quarter time. The Dockers punished the Eagles with six goals in the final quarter. Some late goals to Liam Ryan, Jack Darling and Josh Kennedy were not enough to prevent the Eagles from registering their lowest ever Western Derby score.

Next week the Dockers remain at Optus to play the GWS Giants. The Giants will provide the Dockers with a much sterner challenge. The Eagles will travel to the MCG to meet the Collingwood Magpies. The Magpies will not be in a mood to show mercy, having been narrowly beaten by the Geelong Cats at the same venue. The Eagles will be facing the worst start to a season for many years.