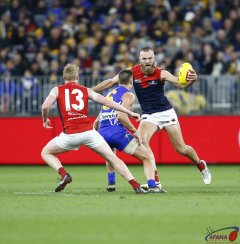 Max Gawn mark on a short lead on the 50m arc and had no issue with the distance to extend the Dees lead to eleven points. Just minutes later Moore at the opposite end returned the treatment from the same range. Hawthorn defenders panicked a little when a quick ball came in to Ben Brown and the front on contact was acknowledged by the umpire, and he converted the free kick he doubled his tally with another just a minute later as McDonald fed a quick handball out to him. Free kick to Koschtizke held in marking contest in the pocket and his goal reduced margin to 10 points as the Demons looked like they might take the game away.

The 3rd quarter started with Koschtizke kicking the first for the Hawks of the second half, but then Melbourne took control of the game.  Brown and Gawn both goaled for the Dees, drawing away from the Hawks again, before Wingard was able to get one back for the Hawks.  Though Oliver was quiet, Petracca and Gawn fueled the Dees drive.  And Brown's aerial threat saw Frost give him another goal from a free kick.

The Demons were now really playing the game in their front half and the pace of Bedford running inside 50 and slotting a goal on the run and then Weideman taking a great mark drifting in front of the pack demonstrated just how dominant the Demons could be. And while those two goal would be in the highlights package the next goal from Petracca, fending off Hawks and snapping another goal for the Demons was probably the best of them. If it wasn't for O'Meara pulling a goal back for the Hawks late in the quarter the result would have looked beyond doubt.

The closing quarter opened with a Tom Mitchell free kick in the pocket after Rivers held him at the boundary throw in resulted in a goal. Howe came in as the injury sub for Conor Nash halfway through the last quarter.  Melbourne wasted opportunities to definitively put the Hawks away.  Worpel unloaded a long kick for a goal to bring the margin back to 17 points.

On the turnover Koschtizke kicked his fourth goal  in the dying seconds to go down by just 10 points against the undefeated reigning premiers.  Coach Sam Mitchell would be happy his team did not capitulate in the last quarter as they had done previously against Sydney and St Kilda a few weeks before.  Melbourne coach Goodwin at home will be happy to see the unbeaten run continue and while Gawn, Petracca and Oliver were all good, performances from Brown, McDonald and newcomer Bedford .