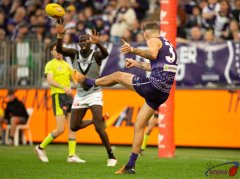 Port started on fire, won the early center clearances and Mitch Georgiades booted two and Ryan Burton one goal after just seven minutes of play. The Dockers reorganized their center bounce setup with Mundy standing on the defensive side, which worked. Regular clearances came and Matt Tabener, James Aish and Rory Lobb equaled the score after nineteen minutes of play. Todd Marshall completed a brilliant snap from the boundary to put Port back in front until just before quarter time, when Lobb found space near goal to mark and kick truly. Port defender Tom Jonas lacked the height to compete in the air with six-foot-seven Lobb who looked set for a day out. His cause was not helped by the low tackle rate of the Port midfielders.

Port Adelaide increased the midfield pressure in the second quarter but the Docker forwards also upped the pressure gauge, with tackling preventing the visitors clearing with any purpose. Goals to Nat Fyfe (playing as a half-forward) Brayshaw, Taberner and Lachie Schultz put Port to the sword. Port defender Aliir Aliir became the first Sudanese-born player to play 100 AFL games and was moved to Lobb to quell his influence. This robbed Port of some defensive run, but Aliir did the job in the second stanza. At the other end, former Geelong Cat Jordan Clark played his best game for the Dockers, using his pace to cut through the middle. Port broke their 24-minute goal drought when Sam Powell-Pepper marked strongly and converted and then Kane Farrell kicked an elegant fifty-meter goal on the run to give Port some hope. The highlight of the quarter was Docker Hayden Young's high mark on the wing. Fremantle forward pressure gave James Aish another goal for the home team and then Caleb Serong calmly slotted a goal-of-the-year contender from the boundary to re-establish a four-goal margin at the main break.

Lobb had booted three more Docker goals within the first eight minutes of the re-start. Port reorganized around stoppages and good work in the middle by Rozee launched a quick transfer to Boak who goaled. Miles Bergman and Rozee also kept Port in touch with further goals from stoppages. Port's hopes rose when Georgiades took a screamer with 28 seconds to play. His shot for goal after the siren missed, to score only a behind (worth one point). The Dockers looked to have the game in the bag at the final change.

Charlie Dixon would have none of that. Port's season was on the line. With a brilliant check-side snap from the boundary, the big man also put his name in the ring for goal-of-the-year. He moved into the ruck at the next bounce, won the tap, laid a tackle, got up, took a handpass and booted a massive 60 meter goal from within the center square. At the next bounce he won the ball again and handpassed to Willem Drew who kicked long to Jaxon Mead, who marked and kicked truly. When Rozee found space to mark and goal, Port were back. Just ten points down with 12 minutes to play. A clutch miss by Todd Marshall let the Dockers off the hook. Then a Brayshaw run-down tackle saw a quick transference to Shultz who steadied the Dockers' ship. Port were not done. Amon launched a magnificent one-step 49-meter goal with eight minutes remaining. The Dockers locked down the hatches, but with 90 seconds remaining Marshall marked close to Port's goal. Again his set shot missed and the Dockers held on for a fortunate win.

Cruelly, Port Adelaide's season is all but done. Next week they meet the Giants at home and then the Melbourne Demons at the MCG. The Dockers play a revitalized St Kilda at Marvel Stadium and will need to be switched on for the whole game to beat the Saints.