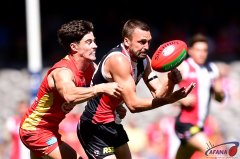 Chief Operating Officer Simon Lethlean said, "Gears hangs up the boots as one of the most influential and dedicated players to represent the red, white and black. As a long-serving captain and leader, Jarryn really put the betterment of this club first and has been unflinching in that mission for the better part of a decade. Our next crop of leaders, namely Jack Steele, Dougal Howard, Callum Wilkie and Tim Membrey, have all benefitted significantly from Gears’ input, and you can see a number of those elements within all of them as a result of his commitment ... and it is now up to us to continue his relentless work and loyalty to the ultimate success ... ".

In his address to teammates, Geary thanked the club and members for their support, “I’ve loved the journey I’ve had at the Saints and it’s been something I’ve cherished ... I couldn’t have dreamed that when John Beveridge picked me ... in the rookie draft that I would have ended up playing for so long and being captain of this club. I want to thank my entire family for their support, but particularly my beautiful wife and our two children Harriet and Freddie. Thank you for sticking by me and supporting me over the years, I couldn’t have done it without you. Thank you to Ratts, Matt Finnis, Simon Lethlean and the board for standing by me ... To our fans and members, thank you for always being there. I wish we could have brought you more success, you certainly deserve it. To the boys and all the players I’ve played with over the years, you’ve all made this club so special to me."

Geary will continue to be involved in with the club for the rest of the season in an unofficial capacity.

The day after Round 19 concluded, Tiger midfielder/forward Kane Lambert announced his immediate retirement due to severe osteoarthritis in his hip. The three-time premiership player managed just seven games this year and 13 in 2021. Lambert, 30, was a star in the VFL when the Tigers selected him as a mature age rookie in 2014. He was a tireless worker who won the admiration of fans and teammates.

When asked during a  press conference, he spoke of the debilitating condition and how he tried to keep a promise to Coach Damien Hardwick to get back, “I’ve probably been a little bit scared to find that out, to be honest,” he said when asked just how bad it is ... it’s a lot of bone on bone ... so it's not so great. Day to day things like putting socks and shoes on, I don’t tie my shoe laces ... getting in and out of cars is a challenge." Eventually, he could go for a hip replacement, “Whether that’s in the short term, I’d like to have a bit of a breather, let it settle and see what it looks like. Hopefully there’s alternative methods and medical advancements ... It’s been a long time coming ... “I approached this year ...  uncertain whether or not I would play again ... Something felt different about my hip ... I remember preseason trying to train and watching the boys ... and thinking, ‘I don’t know if I can do that anymore’. I made a commitment with ‘Dimma’ that I was up for the fight and the challenge ... To explore all sorts of methods in order to get me out and play. I was only ever going to play if I felt that I could help and I could contribute ... I'm not at a level that I feel comfortable contributing ...it’s fair to put myself out there ... not being able to help ... I’ve done all I can ... ".  He also said a highlight of his career was the people around him, “It is not what you win, it is who you win it with, and it has been an absolute pleasure to share this journey with all our players, staff and members both past and present.”

Hardwick paid tribute to Lambert, “What Kane has given us ... can never be repaid, but it can be learned. Dedication, resilience and all the things we talk about ... this man has done it. The way he played the game; we changed things based around him ... Watching him on the field is like a masterclass for an AFL coach. Kane has given us success, but he has also given us some of the off field stuff that is going to last a long time.”

Along with the three premierships in his 135 game career, Lambert placed third in the 2017 best and fairest, second in 2018 as well as two top-10 finishes in 2019 and 2020. Even though he missed nine games in 2021, he still managed another top-10 finish. The respect he has from teammates saw him win the Francis Bourke award in 2020 for best upholding the group's trademark values. He was voted a club award three times for his work to drive club values across the entire club.

Lambert is interested in coaching and administration. He will stay with the club in an off-field role for the rest of the 2022 season.