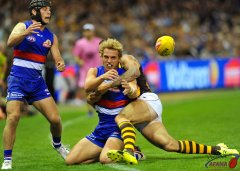 Bulldogs Mitch Wallis and Stefan Martin have both retired. Wallis was a father-son selection in 2011 and became a mainstay in the midfield. He was shifted to the forward line late in his career. The move forward saw him prosper in 2020, kicking 25 goals to be the club’s leading goalkicker, before being named vice-captain of the side in 2021. Wallis, 29, played 162 games and kicked 109 goals. In making the announcement, Wallis said, “I’ve just got so much gratitude towards the Western Bulldogs ... Playing for the red, white and blue was a childhood dream and this club has been my second home for more than a decade. I wouldn’t be the person I am today without the support of many people at the Bulldogs ... “I’ve got so many wonderful memories and friendships that I take with me, and I will be forever grateful to run out onto Marvel Stadium in front of the amazing Bulldogs fans.”

Senior Coach Luke Beveridge paid tribute to Wallis, “Mitch has been a highly respected and professional Bulldogs person from the day he arrived. He has poured his heart and soul into his football. He has been a committed and supportive club man and an influential leader, having experienced the honor of being vice-captain. Unfortunately, he has been held back with injury at times, which has hindered his continuity and ability to influence on the field ... ".

Bulldog ruckman Stefan Martin also retired. Martin, 35, finishes with 203 games: 57 with Melbourne, 133 for the Brisbane Lions, and 13 for the Bulldogs over 15 years. Martin will be remembered as a combative, hard-working Ruckman, who mastered his craft on the field, and a fine ambassador and role model for the game. He said, “It has truly been an amazing ride, and I’m extremely grateful to have played at the highest level for 15 seasons. It’s been a privilege to experience playing at three terrific organizations, and I’d like to personally thank everyone who has helped me over my career ... I am also appreciative of the fans who have supported me ... to play 200 AFL games is something I’m enormously proud of. I leave the game with so many happy memories, strong bonds, lifelong friendships, and the knowledge that the game has made me a better person. I can finish up knowing that I gave absolutely everything I had, and I hope I was able to leave a positive impact on the three clubs I represented, and the teammates I played alongside.”

A talented basketballer growing up, Martin made the switch to AFL as a 19-year-old, and after a few short seasons he had caught the eye of Demons’ recruiters and was picked up by the Demons in the 2008. He had a breakout year in 2011 but was traded to Brisbane at the end of the year. He had a fine career at the Lions, winning the club's best and fairest award in 2015. He joined the Bulldogs at the end of 2020.

General manager of the list Sam Power said of Martin, “We admire Stef for everything he has achieved ... We were lucky enough to work closely with Stef in the last two years, and while injuries have limited his on-field impact, he was still able to play a crucial role in setting up our 2021 season and ultimately helping us get to the Grand Final. His leadership and influence can’t be overstated, in particular the guidance he provided the likes of Tim English, Jordon Sweet and Sam Darcy. Stef can be proud of his contribution to the AFL ... ".

North Melbourne delisted Jed Anderson, Atu Bosenavulagi, Kayne Turner, and Josh Walker. Anderson joined North Melbourne ahead of the 2016 season after three seasons at Hawthorn. Anderson played one game with the Hawks and 88 with North. Bosenavulagi arrived at the club ahead of the 2021 season after two years and three AFL games with Collingwood. The 22-year-old played 17 games for North Melbourne including nine this season. Initially a rookie draft selection by North Melbourne, Turner was drafted as a rookie in 2014 and elevated to the seniors the same year. He played 118 games and kicked 59 goals. He was a member of the leadership group for two seasons. He won the best clubman award in 2021. Walker was originally selected by Geelong in the 2011 rookie draft and played 33 games for Geelong before four seasons and 52 games at Brisbane. He joined North Melbourne as a delisted free agent ahead of the 2020 season and has played a key role in defense over his three seasons He played 54 games for North Melbourne, taking his AFL games tally to 139 over 11 seasons.

Collingwood delisted Jack Madgen, Caleb Poulter, and Cooper Murley. The club is planning on redrafting Murley. Madgen,29, played professional basketball before being drafted as a Category B rookie in 2017. The defender played 49 games for the Pies but was restricted to just nine games due to injuries. Poulter, 20, was drafted in 2020 and played 12 games.