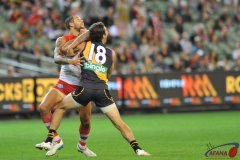 Round 21 represents the 550th game for Bulldog Coach Rodney Eade as a player or coach. Eade played 229 games with Hawthorn and 30 games for the Brisbane Bears. He coached Sydney in 152 games before joining the Bulldogs. Eade becomes just the 13th person in the history of the League to reach this mark.

After the win over Carlton in Round 18, Collingwood Coach Mick Malthouse is equal third for most wins in League history. The victory was the 358th for Malthouse, who began his coaching career with Footscray (now the Western Bulldogs) before taking the helm at West Coast. He is tied with Allan Jeans (St Kilda, Hawthorn and Richmond).

Another Record For Malthouse

Malthouse Up With Best