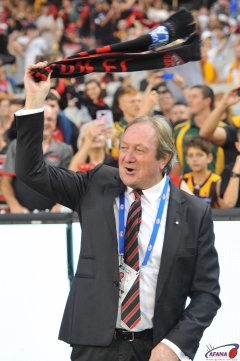 The 66-year coaching record of perhaps Collingwood's greatest ever coach Jock McHale will be equaled in Round Four and surpassed in Round Five. Carlton Coach Mick Malthouse will coach his 714th match, putting him equal with McHale. While McHale played and coached only at Collingwood, Mick's record includes 135 games coaching Footscray (now Western Bulldogs), 243 games coaching West Coast, 286 games with Collingwood and 50 games (through Round Four) at Carlton.

Lance Franklin's move from Hawthorn to Sydney after the Hawks won the 2013 Grand Final is well-documented. Although he was a member of the 2012 side which lost to the Swans, he has the chance to be added to an elite list of players should the Swans again be victorious. While there have been over 70 players who switched clubs and played in Grand Finals for two different clubs, less than half tasted the ultimate triumph with their new teams.
Read more

Round Nine was tinged with sadness as the football community mourned the passing of four-time Premiership coach Tom Hafey, aged 82, after a brief battle with cancer. While Hafey was a serviceable player in 67 games for Richmond1953-58, it was his coaching career which elevated him to legendary status. Hafey was appointed senior coach of the Tigers in 1966 after a successful stint in the VFL with Shepperton. He set up a rigorous and grueling training regimen which helped the Tigers become a force and went on to coach them to numerous Finals series and four Grand Final victories. Hafey also had coaching stints with Collingwood, Geelong and Sydney.

Less than a week before the start of Round One, former Melbourne coach Dean Bailey passed away after a brief battle with cancer. Bailey joined Adelaide as strategy and innovation coach in late 2011 after leaving the Melbourne Demons. The club granted him a leave of absence after his illness was diagnosed last November. Shortly after the announcement of his passing, tributes poured in from all sectors of the football community. All and sundry described him as a very positive person, fiercely loyal and one who had a great sense of humor. Bailey was 47 and is survived by his wife Caron and sons Darcy and Mitchell.

Just ahead of the AFL's season launch events, Commission chairman Mike Fitzpatrick announced that Andrew Demetriou will be stepping down as League CEO at the end of the season. Demetriou, who has held the position since 2003, had actually told Fitzpatrick of his decision while the pair were in the USA to attend the NFL Superbowl. Fitzpatrick said Demetriou had been a "very significant force ... and ... had led the AFL industry through a period of extraordinary growth."