(9/20/20):  We will have schedules for the AFL finals as soon as the AFL releases them and Fox and TSN add matches to their schedules. This is likely late this week. There are no matches next weekend. All finals matches will be live on FS1, FS2, and one of the TSN networks including the Grand Final. ESPN coverage has likely concluded for 2020. WatchAFL has announced prices for the finals for online coverage: US$17 per week, US$72 for all 4 weeks, and the annual price remains US$165. Please use our links on this page. We need your support. Our schedules are free for personal use - any other reposting or reuse must credit AFANA. This summarizes the changes for 2020: We have the schedules for coverage of the resumption of the AFL season. There is live coverage on FS1 & FS2 and on all TSN [Canada] networks including multiple live matches. ESPN carries two live games per week on ESPN1/ESPN2/ESPN3 (no repeats) for the rest of 2020 and schedules will be updated as we receive them. The expanded coverage on ESPN, FS1, and FS2 is not guaranteed to continue past the end of this season as the future contract status is not yet known. US repeats are only on FSP. We also have the WatchAFL schedule and WatchAFL offers all matches live and on-demand. We remain in touch with the networks and will update this notice with more rounds when available. Schedules, as released so far, are through Round 18 for ESPN; and on Fox Round 18 (live) / Round 18 (repeats) and Round 18 on TSN Canada. WatchAFL subscription changed as of the start of round 2. You can also get the schedules for FOX/ESPN on your personal calendar using the USA link and for TSN with the Canada link. 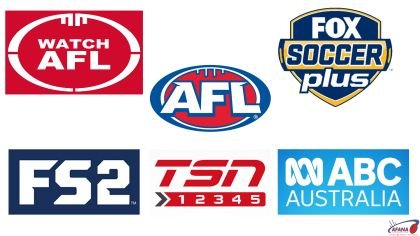 Want to add the schedules for US (Fox/ESPN nets) or Canada (TSN nets) to your phone or desktop calendar? Go here for US and here for Canada.

Schedules © copyright AFANA, 2020. Free for personal use only. Any other reuse, reposting, or use on social networks must credit AFANA.

A note regarding our schedules: 12:00 Midnight is considered the first moment of the new day. This means a telecast listed as Friday 12:00 MN or 12:00 AM occurs Thursday night / Friday morning. All times are US Eastern Standard Time (EST) or Eastern Daylight Time (EDT) unless otherwise indicated. Please adjust the times for your time zone by registering at this site and logging in; the site will then automatically adjust the time to your local time zone. Schedules are, in part, courtesy of Fox Sports, TSN, Fox Sports Australia, ESPN, and the AFL.