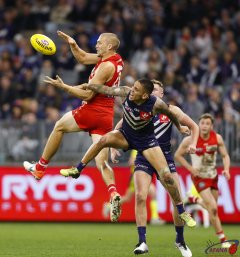 The visitors dominated the first quarter but could not score. Fremantle's last line of defense led by Joel Hamling and Ethan Hughes and Luke Ryan and saved the Dockers from being wiped out in the first quarter. Sydney were more desperate and had more run in them, which left the Dockers lagging behind as the Swans spread across the ground to work the ball from defense. For most of the first quarter the game was a scramble, with both teams flooding players to the ball. It was a battle of 13th versus 14th and it looked like it, with skill errors from both sides. The Dockers' first goal arose after three minutes of play. An intercept and a low tumbling kick forward by defender Joel Hamling, created space for speedster Brad Hill to run, gather, and kick truly from 45 meters. Three minutes later a Sydney transition from a rare Docker attack, ended with Ryan Clarke and Tom Papley delivering to Sam Reid who marked and goaled. The rest of the quarter saw Sydney in attack and the Dockers defending grimly.

The Dockers were more desperate in the second quarter and achieved more entries, but their attacks relied on long bombs to their tall forwards which were easily spoiled by Sydney defenders Dane Rampe and Lewis Mellican. It was a game o congestion and pressure at the fall of the ball. Sydney brightened the game by using run and carry to transition out of defense. Their use of overlap created a free player at the end of each chain. This tactic created space and time for their forwards who obliged by booting four straight goals for the quarter. In contrast, the long bomb attacks used by the Dockers left their forwards under pressure and they could only manage two goals and five behinds (worth a point each), for the quarter.

Ruck domination by Aaron Sandilands, Sean Darcy and Rory Lobb left Sydney's makeshift ruck pair of Allir Allir and Hayden McClean struggling. The Dockers won clearances and stayed in the game when the Sydney runners, Jake Lloyd, Luke Parker, Nick Blakey and George Hewitt were outpointing the Docker midfield around the ground. Sandilands tapped at a stoppage to Reece Conca who booted the Dockers' first goal of the second quarter. The Swans replied with run and close-range goals from Luke Parker, Tom Papley, Sam Reid and Robbie Fox. A rare highlight of the quarter for the home team was defender Griffin Logue forcing the ball from defense and making three tackles, as he moved play to the wing. This inspirational effort stirred the home team and at the 27-minute mark, Rory Lobb competed in a marking (catching) contest and then gathered the ground ball, to kick truly and  keep the Dockers in touch.

Play flowed more freely in the third quarter with the Dockers matching Sydney's run. After nine minutes of hectic play Lobb gathered a loose ball and kicked truly from 55 meters. Five minutes later Brett Bewley booted long to see Lobb mark in the goal square and convert. The Dockers applied heat around the ball and won more contested possessions. Sydney were restricted to just two behinds. A snap by Brandon Matera at the end of the quarter put the Dockers in front for the first time since half-way through the second quarter.

Fremantle's tall forward line paid more dividends at the start of the fourth quarter when Sandilands and Darcy kept Allir and Callum Mills out of a marking contest, allowing Sandilands to handball to Michael Walters. Walters' goal gave the Dockers their biggest lead for the night. Sydney fought back with a good mark and goal to Sam Reid, followed by Nick Blakey marking in the square and converting to bring the visitors within one point. Play transformed into trench warfare, where neither side was willing to concede an inch of territory. The tension increased when Sean Darcy marked for the Dockers ten meters from goal. His shot hit the post to register a point and move Fremantle two points in front. A brutal marking collision between Luke Ryan and Tom McCartin, at the ten-minute mark, graphically illustrated each sides' desperation to win the ball at any cost. With seven minutes to go, Jake Lloyd also missed what he should have kicked. His behind left Sydney a point in arrears. Then Sydney's Tom Papley scored a behind to level the scores. With three minutes on the clock a Luke Parker missed to register one point and move Sydney in front. The Dockers then fought back to see Mundy miss a shot and register a point to level the scores with one minute and 41 seconds on the clock. The Dockers locked the ball in their forward line and Ed Langdon's missed shot registered the winning point with one minute and 25 seconds on the clock. Sydney attacked again, but the Dockers with the help of Sandilands in the ruck were able to hold on for a desperate victory.

Next week the Dockers travel to Marvel Stadium to meet the Western Bulldogs. Both teams are part of a group of four teams that are one game and percentage behind eight spot . The Sydney Swans return to the Sydney Cricket Ground to play for pride against the competition's leaders, the Geelong Cats.