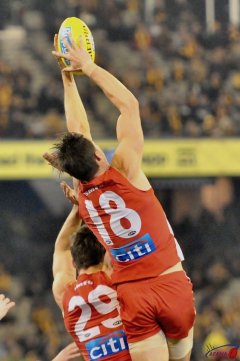 O’Riordan, 26, joined the Swans in 2015 as a Category B rookie, hailing from County Tipperary in Ireland. He has played 34 games for the Swans. Gardiner said, " ... Colin has been one of the most popular members of our playing group and he will be sorely missed. It really is an incredible achievement to move ... from Ireland, learn a new game and forge a successful AFL career and Colin has been able to do just that.”

Ed. Note: Games tallies are through Round 23

Carlton has delisted two more players: Liam Stocker and Will Hayes. Stocker played 28 games in four seasons after making his debut in 2019. He played six games in 2022. Will Hayes made his Carlton debut as the medical sub in Round 17 against the Eagles and was part of the 22 selected against Geelong, in what were his two appearances since being selected as a mid-season rookie this year. List Manager Nick Austin acknowledged the efforts of both players, “Liam gave great effort ... while he was not able to solidify his place in the side this year, his capacity to continue to work hard was a testament to him. Although Will was only on the list for a short period of time, his efforts to earn a place in the side to play two games was a result of his work ethic ... ".