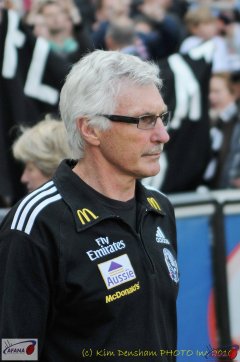 Just ahead of Round 12, the AFL held their annual Hall of Fame induction ceremonies. Three were honored posthumously - the late Trevor Barker, the late Jim Deane and the late Ron Evans. The other three were Brad Hardie, Mick Malthouse and Ken Hunter.

Barker was a hugely talented and much loved and respected player with the Saints. He had offers to go elsewhere but, despite their lack of success, stayed with the Saints such was his love of the club and sense of loyalty. In an old TV interview, which was aired at the ceremonies as part of a tribute to Barker, he said, "If I had left, I would’ve lost identity at another club. It’s always nice to go home to a place you know you’re welcome at.” His mother Norma, 91, was present to accept the award for her late son. Another video tribute featured former teammate Danny Frawley. In the video, a teary-eyed Frawley said, “It’s a great day for the Barker family and a great day for the Saints family.” Frawley recounted a story of how Barker in 1981 donated his car back to a club sponsor so it could be raffled off to ensure his teammates could get paid as the club was in dire financial straits.

Prior to the event, Norma was interviewed at her home by journalist Mark Robinson. At one point during the interview, Norma picked up an old St Kilda jersey with Trevor's number 1 on the back. Tears spilled as she put held it to her face, saying she could still smell him. She later pulled it on during the interview. She also revealed how they had lost Trevor's sister when she was only five years old due to a congenital heart condition, passing away two weeks after surgery. She said Trevor never got over the loss.

Dual Brownlow Medalist and St Kilda champion Robert Harvey, who introduced the induction said Barker’s passing (from Cancer in 1996, aged 39) was “one of the saddest days in St Kilda ... history. Never have I played with a guy who radiated passion and loyalty for his club like (Barker). He was renowned for his high marking (catching the ball), his blonde locks and often his lifestyle off the field. He was a true St Kilda champion.”

Former Saint Nathan Burke tweeted, "The great man Trevor Barker finally in AFLHoF. Walking in as a 16 yr old he was the club legend and the first man to come up and welcome me. Everything I learned about loyalty, treating our fans and loving St K came from his example."

Western Bulldogs Coach Luke Beveridge briefly worked with Barker when Barker was coaching at St Kilda, but said his best memories were watching Barker play, ”He was a brilliant and hard tackler … but then you had the other extreme ... like the high marks, unbelievable skills - he was so clean ... He just had everything ... the ability to run and the courage ... he was the complete player. One of the most rounded, respected, hardest, talented, devoted, loyal players in the game.”

Barker’s long-time manager Jeff Joseph spoke on behalf of the Barker family, “On behalf of Trevor’s mum, Norma ... Trevor’s late father Jack, who would’ve loved to have been here tonight, and also Melinda, Trevor’s partner for so many years, I again would like to say thank you on their behalf and on behalf of all the fraternity that loved Trevor ... if Trevor was here .. he would’ve made one hell of a party of it.”

One caller to SEN Radio's Overnight Crowd spoke of Barker's high-flying marks (catch of the ball in the air) saying he would go where angels feared to tread such was his courage.Former Saints champion Nick Riewoldt, now a match commentator on TV, said everyone still could sense Barker's presence at the club.

Deane's son Michael accepted his father's award and spoke admiringly of his dad who died in 2010 aged 82, "He enjoyed every chance to play with the greats of South Australian football in the 1950s ... with whom he became good friends away from football. It is sad he is not here for this moment ... But he would have been celebrating it as much as all his other success in a game he loved. He never played a final with South Adelaide, but he took solace from his state games. "

He was described as a fierce competitor who perfected the stab pass on his left foot South Australian great and Hall of Famer Neil Kerley said of Deane, "A super courageous player ... tough as nails ... a deadly stab kick with his left foot. Sadly, he played at a bottom club and was carrying so much on his shoulders. The only way for those outside SA to understand how good was Jimmy is to make the comparison with Bobby Skilton. And it fits.” Deane finished his playing career as a star in Victoria's strong Ovens and Murray League as well as being based in Port Pirie while playing in the Spencer Gulf League.

A lanky and talented forward, he once kicked 10 of Essendon's 16 goals against Hawthorn and booted nine on debut for Victoria at the MCG against West Australia. After his stint with West Perth and retiring at the age of 26, he earned an MBA and joined Essendon's board. He oversaw the move of Eseendon's home games at the MCG. He was a successful businessman as well, becoming managing director of catering company Spotless. He then joined the AFL Commission where he oversaw many initiatives to drag the AFL into the 21st century.

Speaking to the AFL web site ahead of the ceremonies, former AFL boss Andrew Demetriou said of Evans, "Ron served the game with the highest integrity, the highest decency and at all times in the most selfless man .. I've ever come across in football. It was always about the game, the clubs and the supporters, never about himself. He had a profound impact on the growth of the game." Former tea..mate Ken Fraser said Evans had ""a disarming charm but a steely resolve". Demetriou elaborated, saying those traits were in evidence in the boardroom, "Ron commanded a significant presence ... when we dealt with politicians, corporate partners, broadcast partners. Ron was respected. He was admired ... when he spoke people listened … I don't think I was ever in a situation with Ron where he raised his voice, ... It just wasn't his style. He was very, very determined and forceful in a very calm way."

Prior to his passing in 2007 after a brief battle with cancer, Evans was made a Member of the Order of Australia for services to business and football. The annual AFL Rising Star award is named in his honor.

A backyard accident with a can of gasoline left him with severe burns over much of his body when he was a teenager. He spent months in the hospital undergoing numerous skin grafts. Doctors told him he would never be able to play sports but he proved them wrong.

He was 6' tall but just 167 pounds. North Melbourne was interested but thought he would be too frail for football. Richmond was also interested but a club official made a snide remark about not "chasing half back flankers". Primarily a defender, he could also play midfield and in the forward line. Later was a club director.

The Australian Football Hall of Fame was established in 1996 and serves to recognize players, coaches, umpires, administrators, and media representatives who have made an outstanding contribution to Australian football.