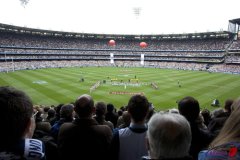 It would be generous to call the second quarter a comeback for the Swans, but they did get close to breaking even. Buddy [Franklin] with an early missed chance gave Swans fans some hope. Soon it was again Geelong in control, and Stengle kicked his first goal for the day.   McLean was finally able to take Sydney's first mark inside 50 and kicked the Swans second goal of the match. However, Geelong was able to match them at every turn and Hawkins kicked his third goal.

Callum Mills kicked another for the Swans, and this was matched by Stengle's second goal for the Cats. As halftime approached Heeney kicked his first goal for the game with only his third possession.  Another player who had been quiet was Sam Reid, who left the field and then headed for the rooms, and subsequently subbed out for the second half. The gamble to play him in this Grand Final had not paid off.  When the siren sounded the Cats were 36 points up, extending the quarter time lead by one point.

Those fans expecting the Swans to mount a challenge in the third quarter were quickly disappointed as Duncan, Close, and Smith kicked quick goals for the Cats in the first five minutes, leaving little doubt as to the result of the match. Geelong's miserly defense would only give up one rushed behind for the quarter. Guthrie kicked another for the Cats before Stengle became the third Geelong player to kick back-to-back goals in the match.

The three-quarter time lead had blown out to 74 points and while the players weren't quite yet celebrating, Cats fans were. As they did in the second quarter, the Swans would almost break even in the last quarter, leaving them well short of victory. Warner kicked the first goal of the quarter. Cameron and Parfitt who had both had relatively quiet days (Parfitt on the bench as emergency coming on for the injured Guthrie) kicked one each for their respective teams.

Defenders McCartin and De Koning unexpectedly put themselves on the goal kicker list as well in the last.  As goals continued to be traded, next midfielders Warner and Selwood took their turn, before Cameron with his second and finally Papley adding just a little respectability to his game kicked the final goal of the match.

The result was a massive 81-point victory to Geelong, winning their first grand final since 2011, despite regularly being finalists in the years since. Chris Scott this season added new talent, tweaked the game plan and prepared his team to peak during the finals perfectly.  Dangerfield, Stengle and De Koning were all in the voting for the Norm Smith Medal, but it was Isaac Smith the standout on the wing with 32 possessions and three goals that saw him presented the award by Nathan Buckley.

The Swans were rarely in the contest and will return to Sydney shattered by the result and coach John Longmire will no doubt already be planning how to turn this result around in the 2023 season. For Geelong, the veterans delivered and now await the inevitable retirements.